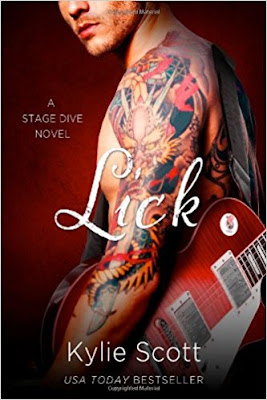 Waking up in Vegas was never meant to be like this.

Evelyn Thomas's plans for celebrating her twenty-first birthday in Las Vegas were big. Huge. But she sure never meant to wake up on the bathroom floor with a hangover to rival the black plague, a very attractive half-naked tattooed man in her room, and a diamond on her finger large enough to scare King Kong. Now if she could just remember how it all happened.
In Kylie Scott's Lick, one thing is certain: being married to one of the hottest rock stars on the planet is sure to be a wild ride.

Evelyn (Ev) wakes up in a hotel room in Vegas after a night of celebrating her 21st birthday. She doesn’t immediately realize that the man she married is actually David Ferris, the lead guitarist of Stage Dive.  She also doesn’t realize that while it may have been a drunken accident to her, it wasn’t for David.

I really enjoyed this book. When I read the synopsis, I thought “oh here we go, another book where the girl wakes up in Vegas to a rockstar and while they plan to get an annulment, perhaps there really is a spark between them” formula.  However, I was pleasantly surprised with how entertaining this book.  I was completely sucked in within the first few chapters.  The characters where interesting and I really want to see how they would make things work given they both have issues they need to deal with.  Ev and David were very likable and you couldn’t help, but cheer them on.  I also really liked the side character of Mal, the drummer as he provided a lot of comedy.

This book was solely written from Ev’s POV and I think that the book would have been better if it was a dual POV of view.  I really would have loved to have seen David’s thought process and feelings.  Over all, I give this book 4 stars and I am really looking forward to Mel’s story in Play.