Lost on the Road to Love by Kay Harris 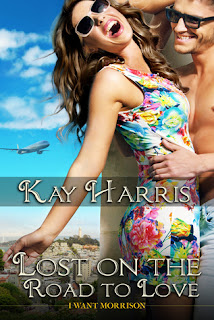 On the road for eight months as part of the crew for a travel show, Chelsea Morrison expects to work hard, endure long nights, and enjoy some wicked adventures. But she doesn’t expect to fall head over heels for the show’s star.
Henry Rush, son of a legendary rock star, is leery of women. He learned early they only want him for the fame that rightly belongs to his father. But when an intense friendship with Chelsea leads to so much more, he has to confront the one thing he’s avoided all his life.
Can these two friends navigate their way to a happy ending?

For those who are familiar with my reviews, I do not often give out 5 stars. Those tend to be reserved for books that I plan on re-reading over and over again.  This is one such book.

Lost  On The Road To Love is the 2nd book in the “I Want Morrison” series. This book can be read as a standalone, but I highly recommend the 1st book because that one is very good too.

This is the story of Chelsea who is trying to make it in the film industry world. She is working for a TV station filming a reality show. She is to follow Henry Rush(ton) around filming as he visits cities throughout the US. The 2 of them form a fast, very close friendship.

Both characters were well developed and I couldn’t help but love each of them. The easy friendship between them and the chemistry were amazing!

For those of you have read the Love On Tour series by Kay, you will recognize that our beloved Henry Rush(ton), who was a baby in the series, is now all grown up. I may have jumped up and down in my seat when I learned he was a main character! Plus there are a few cameos of our favorite rockstars.

This is a stand-alone, friends to lovers romance with a HEA. I received this book as an ARC in exchange for an honest review.