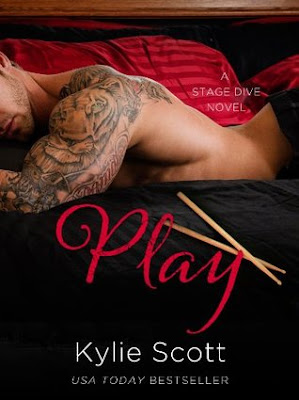 About this book:
Mal Ericson, drummer for the world famous rock band Stage Dive, needs to clean up his image fast―at least for a little while. Having a good girl on his arm should do the job just fine. Mal doesn't plan on this temporary fix becoming permanent, but he didn't count on finding the one right girl. Anne Rollins never thought she'd ever meet the rock god who plastered her teenage bedroom walls―especially not under these circumstances. Anne has money problems. Big ones. But being paid to play the pretend girlfriend to a wild life-of-the-party drummer couldn't end well. No matter how hot he is. Or could it?

Play is the 2nd book in the Stage Dive series.  I reviewed book 1, Lick in my previous post.  This is the story of Mal and Anne.  I was really looking forward to Mal’s book and I was not disappointed.  That guy is hilarious.

Mal is the drummer of the band Stage Dive and is dealing with an issue that he isn’t willing to share with anyone, including his bandmates.  He decides the best way to handle it is to have a fake girlfriend.  He overhears Anne’s conversation at a party about her possibly getting kicked out of her apartment because her roommate left her high and dry.  Thus, begins their whirlwind relationship.  The characters were well developed and you couldn’t help, but root for them.  Mal was entertaining in that you never knew what was going to come out of his mouth and how dramatic he was with jumping into his crazy ideas with both feet.  Anne was the steadfast one, who while loved his antics, was also not always sure when Mal was serious or joking.  The two of them had great chemistry and the book moved at a good pace.

This book is told entirely through Anne’s POV and unlike book 1, I felt that a singular POV from our heroine was the best for this story rather than a duel POV.