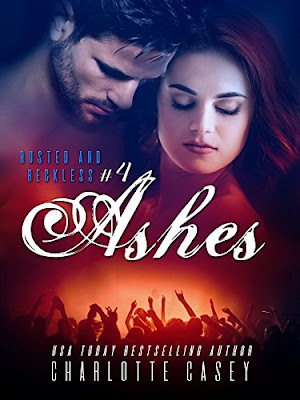 Blurb:
Something to fight for…Lead singer of Rusted and Reckless, Phoenix “Nix” Noland is barely staying legit. Home from rehab, Nix is climbing the walls and fighting the urge for his next fix. But when his feisty, new neighbor in a wedding gown sparks his interest, Nix knows he wants more.Jilted at the altar, Ruby Stevens is ready to start over. Betrayed by her family, she’s free to do what she wants—when she wants. And the sexy singer from across the hall just might be the distraction she needs. But when Nix’s addiction puts him on the edge, it’s up to Ruby to pull him back. Can this particular Phoenix rise from the demons and ashes of his past?

Ashes is the 4th book in the Rusted and Reckless rockstar romance series (see my review for books 1-3 below).  It could be read as a standalone, but there may be a few gaps.  I recommend reading the previous books, especially book 3, Endure.

In the previous books, we learned that Nix [Phoenix] walked off stage during a performance stoned.  He disappeared for nearly a year before turning up at one of their shoes.  In this book, you watch a Nix struggles to find his place back in the band all while facing his ongoing battle of dealing with his heroin cravings. Meanwhile, Ruby suffers the ultimate betrayal and moves across the country to lick her wounds and to have a new beginning.  She moves into the same apartment as Nix.  The two form an unlikely friendship.  Will Ruby’s romantic feelings be returned by Nix?  Will their relationship develop into something more?  We can

I loved both characters in this book and the storyline was interesting. The book moved at a good pace, but did seem a little rushed at the end. This book does a great job depicting what it is like to have a drug addiction.  The daily struggle and also the affect it has on surrounding friends and family.

Overall, I thoroughly enjoyed this friends-to-lovers romance and I hope that Rory gets his own book.