on April 11, 2018
I was first introduced to J.T. Geissinger off Amazon when I completed a previous book and Sweet As Sin popped up as a recommendation.  I wasn't sure if this was going to be your stereotypical rockstar series.  It is not.  The characters in all 3 books are engaging and the chemistry is hot, but it isn't like there is a sex scene on every other page.  No, the intimacy between the main characters of each book is steamy, but it is the storylines that really engage you and keep you wanting more.

*Note: All 3 books are currently available on Kindle Unlimited.*

This blog post will review each of the 3 books in the Bad Habit Series:


Sweet As Sin
Make Me Sin
Sin with Me 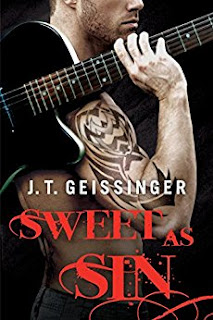 I was first introduced to J.T. Geissinger off Amazon when I completed a previous book and Sweet As Sin popped up as a recommendation.  I wasn't sure if this was going to be your stereotypical rockstar series.  It is not.  The characters in all 3 books are engaging and the chemistry is hot, but it isn't like there is a sex scene on every other page.  No, the intimacy between the main characters of each book is steamy, but it is the story lines that really engage you and keep you wanting more.

*Note: All 3 books are currently available on Kindle Unlimited.*

This blog post will review each of the 3 books in the Bad Habit Series:

Sweet As Sin
Make Me Sin
Sin with Me

Twenty-something Kat Reid is loving life as an in-demand Hollywood makeup artist. She has absolutely no interest in rock 'n' roll, but in order to pay the mortgage, she agrees to work on the set of a rock video for the world-famous rockers known as Bad Habit...which brings her face-to-face with Nico Nyx, lead singer of Bad Habit and Adonis in the flesh.

However, the fiercely independent Kat isn't impressed by the hard-living, womanizing rock star. But when Nico's model girlfriend shows up to the set drunk and Kat is tapped to replace her as the video's sexy bride, her combustible chemistry with Nico suddenly threatens to consume the set. Nico feels it, too--and becomes determined to win Kat over, body and soul. Yet behind his rock god swagger, Nico hides a dark secret. Can he rock Kat's world forever, or will he just break her heart?


Review:
This book was not what I expected and in a good way.  Kat is a really likeable character and you can really feel the chemistry between her and Nico.  Nico is in every way the hot, sexy rockstar. There were twists and turns that kept you guessing right up until the end.. 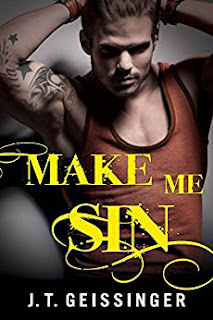 Blurb:
A RITA Award finalist, Contemporary Romance: Long.
Chloe Carmichael’s life feels pretty sweet—she’s both maid of honor and florist for her best friend’s A-list wedding, things are getting serious with her boyfriend, and her flower shop is about to get a spread in a national magazine. But it all quickly turns sour whenever the best man, Bad Habit drummer A.J. Edwards, shows his face...his handsome, unforgettable face. A.J. is everything Chloe doesn’t want: tattooed, selfish, and all-around bad news. So why can’t she stop thinking about him?
Goody two-shoes Chloe isn’t exactly A.J.’s type, either, but the chemistry between them is undeniable. A.J. will be the first to say he isn’t a saint, but there’s something he’s not saying—something that would devastate Chloe. The only way he can protect her is to push her away, but the drummer finds he needs her now more than ever. When a wedding-day confrontation reveals secrets they’re both hiding, will Chloe and A.J. ever find their rhythm again?

Review:
Oh my goodness! I think that this may be my favorite book int he Bad Habit series. This is not your typical rockstar, friends-to-lovers romance. It is so much more. In the previous book, Sweet as Sin, you get a little glimpse at the intense (and not so nice) interactions between AJ and Chloe. I really wanted to know why those two argued so much. AJ is a really interesting character. He is quiet, broody, and not many people know his history. Chloe is a people pleaser who is running her own floral shop (I loved learning more about the floral business) and she wants to know what AJ's problem is with her. Oh goodness, hot chemistry between them is off the charts! This book depicts a great love story. Have your tissues handy! 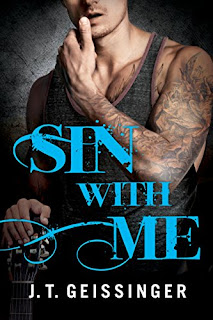 Blurb:
The past she can’t remember. The secret he hides. And a love that’s worth risking it all.
After a devastating car crash stole both her family and her memory, Grace Stanton was left with no past and an uncertain future. Now Grace likes to keep things simple. No sleepovers, never date a guy more than a month, and never, ever fall in love. Which is exactly why Grace avoids Bad Habit’s lead guitarist, Brody Scott, at all costs. The green-eyed, sexy-as-hell musician has “trouble” tattooed all over him, and Grace isn’t taking any chances with her heart.
Brody knows he doesn’t deserve an amazing woman like Grace—her creamy skin, red hair, or that smart mouth that fuels his every fantasy—but there’s something between them that’s more than chemistry. Something real. He’ll just have to convince Grace that he’s worth the risk—and hide the secret that haunts his worst dreams. But when fate plays a cruel hand, Brody’s darkest sin suddenly threatens his last chance at redemption…and the life of the woman he loves.

Review:
This is the 3rd book in the Bad Habit series. While it can be read as a standalone, I do recommend reading the previous 2 books. This is Brody and Grace's story. I really liked Brody in the previous books and you cannot help but love him in Sin With Me. You can tell in the other books that he has a thing for Grace so I was really looking forward to this book. I honestly wasn't sure that I would like Grace, but I loved her in this book. She has had a difficult past and is missing part of her memory from before an accident. This makes for an intriguing storyline. You can figure out pretty quickly that Brody is somehow involved in her past (it isn't necessarily what you think!), but neither one of them know it. You can see just how much what happened has shaped both Brody and Grace separately. The two of them together is explosive and you cannot help, but hope that their pasts don't destroy them. While I loved Grace, I really felt the intensity of Brody's love for her more than what she felt for Brody. Overall, I ended the story and I was left reeling when I learned what had happened. Overall, I thought this was a good love story, with a unique and good storyline, but I prefer the previous two books in the series.
Amazon

I am really hoping that there will be more books in this series as J.T. Geissinger is a talented author who really knows how to create likable characters and pull the reader in.