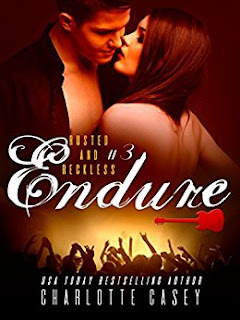 About this book:
Torn between her desire for one and her devotion for another.Determined to find his brother without losing his heart to her.Rusted and Reckless has been struggling since their lead singer walked out. Hellbent on keeping his band together, lead guitarist, Sawyer Nolan will do anything to find his brother and bring him back where he belongs. After all, he’s got to keep his band rocking—even if it means denying his increasing feelings for their sexy assistant. Keeping things casual and on the down low has always worked for them.Assistant manager Darcy Holmes loves her secret romps with Sawyer Nolan, but the closer they get, the more she’s hiding. Determined to save the band and Sawyer’s heart, Darcy refuses to reveal the truth behind his brother’s disappearance. But when the stakes get too high, will keeping the truth be even too reckless for her?

Endure is the 3rd book in the Rusted and Reckless rock romance series.  It can be read as a standalone, but I do recommend reading the previous 2 books.

Nine months ago, Sawyer’s brother and lead singer of Rusted and Reckless, Nix, walked off the stage mid-concert and was never seen again.  Sawyer holds out hope that Nix will comeback and yet, worries that Nix may be dead from ODing.

Darcy, the band’s manager, has been in love with Sawyer for 3 years, but their relationship has been nothing more than hook-ups during times they are in the same time. She wants more and as it seems like their relationship is headed in that direction, secrets and lies start to weigh on her.  Afterall, she knows things about Nix and yet hasn’t revealed them to the band.

I really liked both characters. Sawyer stepped up to the plate to keep the band going and was fiercely loyal to his brother even though he had no idea where he was.  He became a mother hen and you could truly understand his fear that something would happen to any one of the other band members.  Darcy, while loving Sawyer, put her loyalty to Nix first.  It was hard to not want to shake her! Starting a relationship with so many lies is a recipe for disaster.  If I was Sawyer, I would have a hard time trusting her after the truth comes out even if it was kept from him for a good reason.  Still, I couldn’t help but feel for her - she was stuck between a rock and a hard place  - trying to not lose her job because she was in a relationship with a client and trying to maintain her loyalty to a man who up and left while knowing that keeping this from Sawyer would hurt him.

I received this book as an ARC from Booksprout in exchange for an honest review.