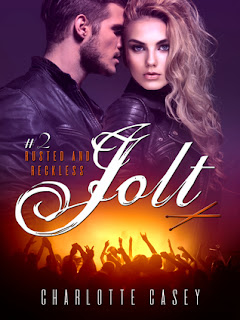 About this book:
Jason Keefer, drummer for Rusted and Reckless, has the fame and money he’s always wanted, but something is missing. The sweet letters he gets from his five-year-old “biggest fan” keeps his life in perspective. But when he receives an anonymous tip that she’s in trouble, Jason doesn’t hesitate to help.Encountering the little girl for the first time in her rundown trailer, he soon learns that they’re more connected than he ever realized. Her aunt, Jade Holmes is the one girl he let get away years ago. Now, smitten with the little girl and drawn to Jade, Jason sets out to make a difference in both of their lives. But when the past refuses to let go and traps Jason by the balls, he’s backed into a corner. Can he fight the reckless demon from his past for a future he’s always wanted?

A while back I reviewed Chance by Charlotte Casey, which was book 1 in the Rusted and Reckless rock romance series.  Book 2, Jolt, is about the drummer, Jason, and artist, Jade.  This book can be read as a standalone novel, but I do recommend starting with book 1.

As you can tell from the description, Cara, a 5 year-old girl, sends Jason drawings through fan mail.  Jason treasures these drawings and one day, a letter falls out of the envelope tell him the he is her father and that she needs help.  The letter was written by Jade, her aunt.  Cara’s home situation is bad and Jade has been trying to help out as much as possible, but things get to be too much.  Jason, immediately falls in love with his daughter and wants to fight for full custody of her.

Six years ago, Jade and her cousin met Jason back stage at one of his concerts. Jade was attracted to him and never forgot their interaction. Jason remembers Jade and he wants to start a relationship with her.  Unfortunately, Cara’s mom manipulates both of them as much as she can.

You cannot help but love Jason in this book.  As soon as he learns Cara is his daughter, he rushes to become involved in her life.  He wants to give her the world.  His interactions with her a priceless.  Jade, is such a beautiful  character.  She wants to be with Jason, but she also knows that she must put Cara first.

You cannot help, but fall in love with these characters and root that all 3 of them can be a family together.