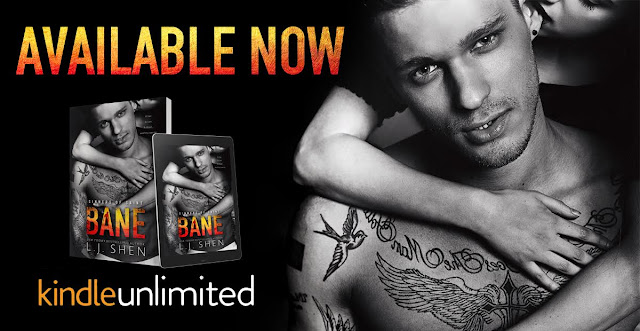 Bane, the highly-anticipated next standalone in the Sinners of Saint Series by L.J. Shen is LIVE!


Bane
Naked surfer. Habitual pothead. A con, a liar, a thief and a fraud.
Last I heard, he was extorting the rich and screwing their wives for a living.
Which is why I’m more than a little surprised to find him at my threshold, looking for my friendship, my services, and most puzzling of all—looking humbled.
Thing is, I’m on a boycott. Literally—I cut boys from my life. Permanently.
Problem is, Bane is not a boy, he is all man, and I’m falling, crashing, drowning in his sweet, perfect lies.
Jesse Carter
Hot as hell, cold as ice.
I wasn’t aware of her existence until a fat, juicy deal landed in my lap.
She’s a part of it, a little plaything to kill some time.
She is collateral, a means to an end, and a side-bonus for striking a deal with her oil tycoon stepdad.
More than anything, Jesse Carter is a tough nut to crack.


Review:
**WARNING: the heroine experiences flashbacks of sexual assault during this book**


5 stars for this new release by L.J. Shen.  I have been curious about Bane since his semi-minor role in Scandalous.  He had seemed like such a happy go lucky guy.  In this book, he is all alpha male and maybe he isn’t as bored and laid back as he wants people to believe.

Jesse, having suffered from rape by her high school boyfriend and his 2 friends, has retreated into herself. She spends most her time alone, but she is such a survivor and a very strong woman.  It amazes me how she could have gone through so much and continues to go through even more without breaking.  As her father told her “the princess saves herself in the fairytale”.

For Bane, Jesse is a means to an end for getting funding for real estate development, but what happens when the thief, liar, extortionist, and escort starts to have strong feeling towards Jesse?

This book is stays true to the previous Sinners of the Saints novels.  He is a strong alpha male that you cannot help, but love.  Jesse, is a strong heroine who you hope can teach Bane to fall in love.  The two of them make a great couple and their love is all encompassing and intense.  The chemistry between them is hot!  I was impressed, because while the sex scenes are well done, there are also some seriously steamy scenes before they even engage in sex. The book moves at the perfect and is told from a dual POV.  The last 50% of the book - oh my goodness where there all sorts of twists and turns that I didn’t see coming!

The only downside for me is that the author used the word “f*cktard”.  My daughter has special needs and the word r*tard and any variation of the word such as f*cktard has been thrown as a degrading insult to both my 8 yo daughter and to others with disabilities.  It is the equivalent of saying n*gger or fag, but this used with a population that cannot always defend themselves.  There are so many other words that could have been used instead and f*cktard was not integral to the storyline or getting a point across.

I received this book as an ARC in exchange for an honest review.