Review: Melt For You by J.T. Geissinger 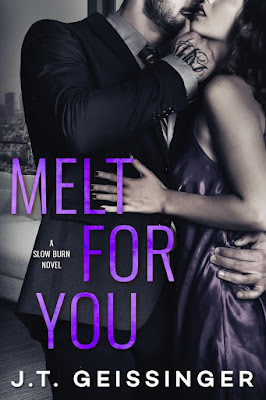 About:
A wallflower gets seduction tips from a playboy athlete—until love changes the rules.
Socially awkward Joellen Bixby has a date every Saturday—with her cat, a pint of ice cream, and fantasies of the way-too-handsome Michael Maddox. She’d give anything to win over the unattainable CEO of her firm, but how can she when she blends in so well with her cubicle? The answer may be closer than she thinks.
Cameron McGregor is a cocky, tattooed Scottish rugby captain who just moved in next door. He’s not Jo’s type—at all—but the notorious playboy is offering to teach the wallflower everything he knows about inspiring desire. Though a lot of women have rumpled Cam’s kilt, Jo is special. Far from the ugly duckling she thinks she is, in Cam’s eyes she’s sharp, funny, and effortlessly sexy. Now, thanks to him, Jo is blooming with confidence and has the man of her dreams within reach.
Unfortunately for Cam, he’s just helped to push the woman of his dreams into the arms of another man—and now he’s in the fight of his life to keep this beauty from getting away 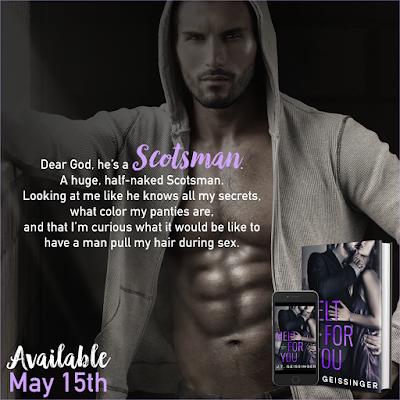 Joellen, is a curvy woman working a publishing firm.  She is “in love” with her soon-to-be divorced “perfect” boss and she believes the she is invisible to him.  She suffers from low self-esteem when it comes to her looks having grown up with a runway model mother and her beauty pageant sister.

Cameron is Joellen’s annoyingly loud neighbor who offers to help her boss notice her.  He sees her for who she is - a beautiful woman whose parents have belittled her looks and self-worth throughout her life - and is anger that she looks down on herself.  It becomes obvious that the more Joellen’s boss pays attention to her, the more Cameron sulks.

Will Joellen overcome her self-esteem issues?  Will she be with her “perfect” boss or will she choose with the egotistical, annoying rugby player who has always seen her?

The scenes with Cameron and Joellen are hilarious.  Some of the conversations between them have left me snorting back a laugh (also earning me the side eye from my husband who’s wondering what is so funny).  Then the officemate, Denny, and his fart jokes.  Oh this book was hilarious, steamy, and romantic.

A former headhunter, J.T. Geissinger is the author of more than a dozen novels in contemporary romance, paranormal romance, and romantic suspense. She is the recipient of the Prism Award for Best First Book, the Golden Quill Award for Best Paranormal/Urban Fantasy, and is a two-time finalist for the RITA® Award from the Romance Writers of America®. Her work has also finaled in the Booksellers’ Best, National Readers’ Choice, and Daphne du Maurier Awards. Join her Facebook reader’s group, Geissinger’s Gang, to take part in weekly Wine Wednesday live chats and giveaways, find out more information about works in progress, have access to exclusive excerpts and contests, and get advance reader copies of her upcoming releases.