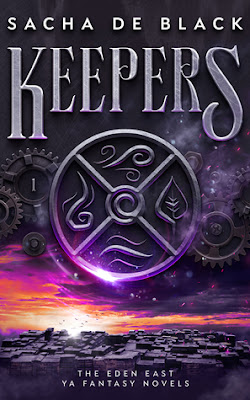 Blurb:
Seventeen-year-old Eden East lives in a world ruled by fate. A fact she accepted, until her soul was bound to her enemy. Now, accepting her fate is impossible, especially when Trey Luchelli appears. There's something strangely familiar about him. Something Eden really ought to ignore. But the more she tries, the more she's drawn to him. Eden is determined to find out what he's hiding, no matter the cost, even if it’s her heart. Then her parents are brutally murdered, and everyone’s a suspect, including her best friend.  Murder. Secrets. Destiny. They're all connected.  But the path to answers is fraught with betrayal and danger. And the closer Eden gets, the more she unravels a dark history that will force her to question everything she's ever known. Keepers will transport fans of The Red Queen, The Young Elites and The Lunar Chronicles to a world unlike any other...

Keeper is my first book by Sacha Black and it is an enjoyable YA paranormal story.  Sometimes I have trouble getting into YA fiction, but I had no trouble devouring this book.  Sacha does a great job creating a paranormal world full of action, romance, and intrigue.  The writing is fresh and with a world unlike any other paranormal books that I have read.  There is a glossary in the front of the book so be sure to read that first or you will be a bit lost in the beginning.  Please note that this is NOT a standalone book, but rather a first in a series.

Eden is a very likable and strong heroine.  She a 17 years-old elemental Fallon who when her parents die, she inherits their gifts.  Trey, her former childhood friend, is the only other Fallon in their history to have experienced the same phenomenon.  Victor is a shifter Fallon who was predicted to be her bound. He is arrogant and has a clear dislike of Eden.  He is less skilled than Eden and I believe he resents her for that. There is good character development in this book and it moves at a good pace. I am looking forward to Book 2 - Victor being released on July 5th.

I received this book as an ARC and I am voluntarily leaving this review.  All thoughts and opinions are my own.