I'm no Prince Charming. Most people know me as the drummer for Nothing but Trouble. Depending who you ask, I'm also a playboy, a loner, the life of the party, a screw-up, or according to my fans, "The Sexiest Rock Star on the Planet." Apparently, I'm a legend. Am I surprised? Hell, no. It's a reputation I've earned behind my drum kit and behind closed doors. No one thought foster kid Landon Cox would become famous. Infamous, maybe. Notorious, probably. But successful? Never. No one except Piper Hastings. But I had to make a choice: my woman or my career. I picked fame and fortune... and spent every damn day since pretending I don't regret it. Now fate's dropped Piper back into my life. I want to believe it's a second chance for me - for us. But while I can give her a few great nights, I can't give Piper a future. Because there's a difference between a legend and a fairy tale... Only one of them ends happily ever after. 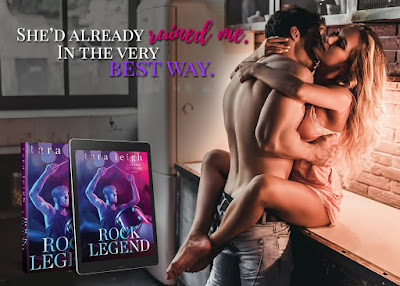 Rock Legend is a second chance, rockstar romance. It is book 2 in the "Nothing But Trouble" series, but it can be read as a standalone. This is the story of Landon, the sex god drummer of “Nothing But Trouble” and Piper, who we met in the previous book “Rock King” as the PA to the band’s manager.  I really enjoyed this book by Tara Leigh.  The characters were likable and well developed and the book moved at a good pace.  I love how the story was told from a dual POV.  While this is the second book in the series, but I do believe it could be read as a standalone.  However, I highly recommend reading Rock King as it is also really good.

Piper and Landon met 6 years earlier when she was a college freshman and Landon wasn’t yet famous. Suddenly, he leaves without a word, but neither one of them got over each other.  Even though she has worked for his band’s manager for 3 years, she managed to go undetected by him until a connecting at the manager’s party.  The chemistry is stronger than ever, but Piper is still hurt.  Landon isn’t afraid to admit that he messed up, but he is battling his own demons.  Piper is a strong heroine who doesn’t want to have her heart trampled again,but also can’t help but still love Landon. I love how Tara is able to create characters that are not perfect - they are strong and likeable, but they also have flaws. The sex scenes are spicy. Throughout the first 40% of the book, you gradually learned about why Landon up and left.  It’s all about making it big.  There are also a few other surprises that keep the book interesting.  You do get to see small snippets of Delaney, but I really would have liked to have more scenes/interactions with Delaney and Shane as well as the other members of the band.  I am now really looking forward to the next book - Dax’s story!

I received this book as an ARC and I am voluntarily leaving this review.  All thoughts and opinions are my own.

Purchase the previous book in the series...