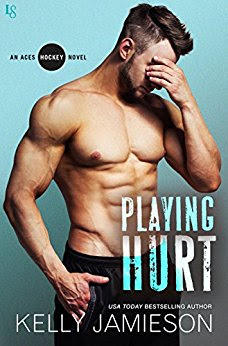 If you love a good sports romance this is a great book to pick up.  Playing Hurt is a great addition to Kelly Jamieson's ACE's Hockey series.  It can be read as a standalone.  There is a guaranteed HEA with no cliffhanger and no cheating.

Blurb:
He’s playing hurt. She’s laying low. And they’re both flirting with disaster. “Kelly Jamieson is my go-to author for hockey romance.”—Jami Davenport Chase: The last thing I’d ever want to do is let my team down. After overcoming my bad-boy reputation, I was dominating on the ice. But things aren’t going so well this season, and even my parents think I’m partying again. Now I’m really worried about my career. The only bright spot in my life is the Twitter flirtation I’ve struck up with pop princess Jordyn Banks. Turns out she’s a huge hockey fan—and she’s willing to wager a date on her favorite team. . . . Jordyn: Even though I’m an L.A. fan now, I’ve always had a soft spot for the Aces, since I grew up in Chicago. Then I lose a bet to Chase Hartman, and suddenly I’m up close and personal with a pro athlete who’s anything but soft. Not only is Chase the hottest guy I’ve ever met, he’s secretly super sweet. As if I had time for a relationship . . . yeah, right. But when I suddenly have nothing but time on my hands, he’s the only one who understands. Now, with both of our careers at stake, Chase is tempting me to put my heart on the line too.


I do love a good sports romance! Jordyn is a famous popstar who is a big hockey fan and used to people using her due to her fame.  Chase is a famous hockey player who is struggling this season and also always have people using him.

Chase has secretly like Jordyn for a while and is shocked when she begins following him on Twitter.  One things leads to another and a bet is made for them to go on a date. However, can they survive a long distance relationship with her living in LA and Chase in Chicago?

One of my favorite parts of this book is the witty banter between the two of them on Twitter.  It is highly entertaining and made me laugh. They also go on these wonderful dates - oh I would love for Chase to be my book boyfriend based on his date ideas!

Chase and Jordyn have great chemistry between them and I enjoyed their easy and hilarious banter.  I love all of Kelly Jaimeson's ACE's Hockey books and while this one was very entertaining, it is not my favorite.  Still Playing Hurt is definitely worth the read and I definitely plan on reading the next book in the ACE's hockey series.

I voluntarily read and reviewed an ARC of this book.  All thoughts and opinions are my own.