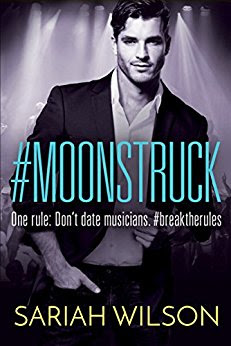 * #Moonstruck is the 2nd book in the #Lovestruck Novel series.  It is a rockstar, fake girlfriend romance. It is a standalone novel.  No cheating and no cliffhanger.  Guaranteed HEA.*

Over one million “likes”—but only one of them matters.
After pop star Ryan De Luna praises Maisy Harrison’s YouTube cover of his classic hit, he offers Maisy and her fledgling band the opportunity of a lifetime: to be his opening act.
Music may be Maisy’s life, but she has one ground rule: never date a musician. That goes double for a heartbreaker like Ryan. If only she didn’t feel so vulnerable to his larger-than-life charm. And maybe now more than ever, when he asks for her help to shake off his playboy image. How can she resist playing the part of his fake girlfriend for the duration of the tour?
Ryan’s never met anyone like Maisy. She sees past all the star-studded fame and treats him like any other guy. And the more time they spend together, the more he finds himself falling for her. Now he’d like to make their imaginary fling an IRL thing. But can he convince her to take a chance and trust him with her heart?

I am always up for a good rockstar book and this one didn’t disappoint.  I really enjoyed the previous novel in this series #Starstruck (which I highly recommend), but I I liked this book even more.  Maizy loathes Ryan, a famous popstar, and has no qualms about letting him know upon their first encounter.  Due to some family issues, she refuses to date musicians. However, as she ends up on Ryan’s tour, she realizes that there is more to him and she wonders if she should break her rule.

I liked Maizy, but I loved Ryan. He is so romantic and respectful of her beliefs (no sex before marriage) and he is definitely more mature than Maizy.  He had some family issues too, but definitely handled them better than Maizy.  Hence why I loved him and spent some of the novel wanting to tell her to “grow up” and face her fears and insecurities head on. Maizy has 3 over protective brothers that I find entertaining.  I would mind having books about Cole and Parker.

In the beginning of the book, the two of them had some hilarious text exchanges. Towards the end of the book, there is big drama and I wanted to shake Maizy for her reaction.  She allowed her insecurities get the best of her and left Ryan in a time of need, but Sariah does a great job showing how Maizy realizes her mistake and gains maturity.  I just wish that all the drama occurred a little earlier in the book (it started at 90%) so that it didn’t feel as rushed. There is a neat little twist at the end that I wasn’t expecting.  The book is told entirely from Maizy’s POV.  I often like dual POVs, but in this case, having the POV from Maizy only is more appropriate.  I do wish that there was a short little epilogue at the end.  Overall, I enjoyed this sweet, clean, romance and I am looking forward to the next book in the series, #Awestruck which will be out in January of 2019.