Book Review: All I Want by Athena Wright 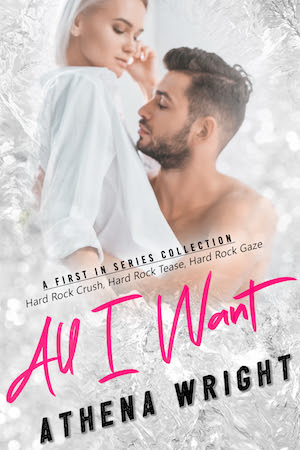 Read the first in each of Athena Wright’s 3 contemporary, rockstar romance series, along with 3 brand new holiday bonus scenes.

About:
3-in-1 just for the holidays and then it's gone! Enjoy your essential winter reading with this first-in-series romance sampler collection. Hard Rock CrushFalling in love with Liam Knight is the worst idea in the world. That tempting, seductive man stirs up feelings I've silenced, memories I've suppressed. He reminds me of everything I almost had - and everything I lost. He's the one man I know I shouldn't fall for.Then why does my treacherous heart keeping saying he's the only man for me?Hard Rock TeaseNoah Hart is guarded. Distrustful. Abrasive as hell. I know I should stay away. Noah doesn't know what trust is. He doesn't know what love is. I refuse to hand my heart over to a man like that.Then why can't I stop myself from falling into his bed?Hard Rock GazeJayce Evans is smoldering. He's mysterious. He's also frustrating as hell. One minute he wants me. The next he's pulling away. It's impossible to resist the chemistry between us. But then there's Neil, the guy I've been crushing on. I shouldn't feel so torn between these two men.Then why can't I stop myself from wanting to ease the pain I see in Jayce's eyes
---Get this sizzling, limited-time romance collection before it's gone!

4.5 Stars This boxset is a compilation of this author’s first book in each her 3 rockstar series - Cherry Lips, Darkest Days, and Feral Silence - plus bonus scenes.  I have read all of Athena Wrights’s novels and I have enjoyed every single on of them.  They are rarely the typical rockstar romances.  The male characters are always a little rough around the edges, but they are also vulnerable too. They heroines are strong, but they also have their faults. The author address deep issues in her books and it is evident that she does her research.  For those of you who have read these books already, I still recommend checking out All I Want as the bonus scenes are good.

Hard Rock Crush: Cherry Lips
4.5 stars What I love about this book is that the heroine, Cerise, is a hard rocking singer. She has a strong confident persona on stage, and yet she is a mess off running from her feelings about something in her past. Liam was in a successful band before helping out Cherry Lips as a session guitarist. He is cagey about why his band broke up, but you can tell that he is still affected by it. Liam and Cerise have an intense attraction to each other, but both of their feelings regarding their pasts start to interfere with their budding relationship. I really enjoyed this book as both characters were well developed and very likable. Getting to know the "real" Cerise was intriguing and I was kept interested as we gradually learned about why Cerise and Liam are the way they are. The sex scenes are steamy, but they are not over the top.

Hard Rock Tease: Darkest Days
5 stars This was my first Athena Wright book and I was addicted to her writing from the first page!  I always love a damaged, bad boy rockstar and the author does not disappoint with Noah. At first I didn’t like him at all -  he is an arrogant jerk towards Jen as he refuses to admit that he needs help with writing his songs.  While Jen is a big fangirl of Noah’s she doesn’t get along with him given his behavior towards her. Both characters are strong and survivors, yet they have that vulnerability about them.  Jen is insecure and Noah has trust issues as their traumatic pasts have left emotional scars.  The storyline was interesting, it moved at a good pace, and the characters were well developed.

Hard Rock Gaze: Feral Silence
4 stars This is my least favorite of this author’s books, but it still deserves 4 stars. I am usually not a big fan of love triangles, but I think this one worked. I don’t want to give anything away relating to the love triangle, but just know that Ailey develops feelings for both Jayce and Neill and it is difficult for her to choose.  Let’s just say that there is a bit of a twist. The characters were interesting.  Ailey is a bit young and naive, but she wants to be successful in her profession.  Jayce is that sexy rockstar, but he is struggling in managing his career and his real life.  Neill knows Ailey online and really likes her, but at first she doesn’t realize that he online friend and Neill are the same person.  I know some reviewers referred to the end of a book as a cliffhanger, but I somewhat disagree.  They get their HEA, but there is a twist at the end that leads into another band member’s story - Kell’s.

About the Athena Wright: 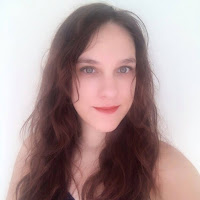 Athena Wright is a USA Today Bestselling author of New Adult and Contemporary Romance. She loves to write about rock stars and the girls who tame their wild hearts. Hobbies include procrastination, wasting time on the internet and living out her rock star dreams at karaoke bars. Athena is perpetually on the hunt for her next caffeine fix.