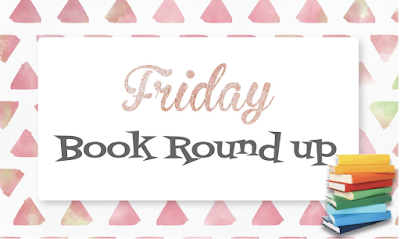 Happy Friday, y’all!  It is time for this week’s book round up.  Have you read any good books lately?  If so, leave your recommendations in the comments.

It’s been a busy week over here, but I am finally getting over bronchitis so I feel a bit more human.  It was a busy week with me spending an inordinate amount of time on the phone with doc offices, insurance, the pharmacy, insurance again, payroll, etc. so I really needed to decompress with reading.

This week I read a emotionally gripping book, a paranormal romantic suspense, a rockstar book, and in the middle of a romantic comedy. 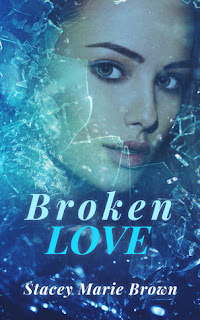 5 stars I was thrilled to snag an ARC of Broken Love by Stacey Marie Brown.  It is book 2 in her The Blinded Love series so you must read book 1, Shattered Love first.  I don’t want to give anything away, but this book is definitely worth 5 stars. Broken Love is raw, gritty, entertaining, and an emotional rollercoaster full of love, heartache, tragedy, and hope.  I don’t always like to read books where I cry and feel like my heart is getting ripped out, but the author crafts such a beautiful story about two people who have such an intense love that it is like they are magnets with a gravitational pull towards each other.  They survived tragedy in book 1 and still their path towards their HEA is a long, winding road.  Seriously, just read the book.  It is amazing.

Life shattered my bones, now it wants to break my heart.

Jaymerson Holloway thought all her grief and pain were behind her. Unfortunately, life has other ideas.

Where hearts shattered into pieces and love slips through your fingers.

Leaving everything behind to follow her dreams, Jaymerson travels to Italy, where she learns to stand on her own, move on with her life, and open her heart to another. But nothing prepares her for seeing Hunter’s life explode over the TV screen and watching his success, which comes with lots of women wanting a piece of The Haze. Crueler is the agony of seeing him fall in love with another. But that isn’t even the worst of it.

When she returns home and their paths cross, they are no longer the same people. The old animosity they once felt for each other flares the ties between them. Especially when more secrets and truths are uncovered.

Like moths to flames, their undeniable chemistry continues to pull them to each other and tangle their lives together, even though it will only end in heartbreak and sorrow.

Don’t miss the second installment of the Blinded Love Series, the final story of Jaymerson and Hunter, but don’t despair. Stevie is up next in the third book, Twisted Love. 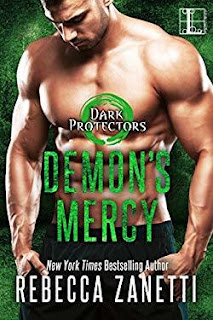 4 stars Demon’s Mercy is an upcoming release by Rebecca Zanetti.  It is a part of her Dark Protector series and all the prior books must be read first or this book will not make sense.  In this paranormal romantic suspense, we finally get Logon Kyllwood’s story and boy is he a hot alpha male who can sometimes be a bit bossy.  Mercy is *shock* one of the Keys and she is also fae.  There is a lot action and intrigue in this book.  There are a few things that I wish the author did differently (see more in my GR review), but it was an enjoyable fast paced book and I can’t wait for the next one in the series.

Mercy O’Malley hates killing people. So when she’s assigned to take out Vampire-Demon Logan Kyllwood, she lures him to a seedy bar in Scotland, then decides to kidnap him instead. How can she cold-bloodedly end all that heat, those green eyes, that ripped body?

Unfortunately for Mercy, attempted murder and kidnapping are just foreplay for the Kyllwood brothers. Logan may be the youngest of the bunch, but death and violence are already a way of life.  Now he’s ready to complete a painful, terrifying ritual to become one of the Seven, dedicated to protecting this world from the most dangerous evil it’s ever known. But first he has to deal with a blackmailing Fey, a ransom demand and his own pounding need for the last female he ever should have fallen for . . . 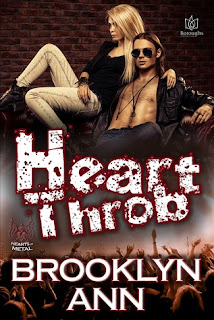 5 stars  Yes, yes, I know that I said that I don’t hand out many 5 star reviews and lately I seem to be contradicting that claim.  That is because there are a lot of good books that are out there.

Anyway, Heart Throb is an upcoming release by Brooklyn Ann.  Truth:  I just discovered her last week.  I’ve decided that Brand, the bassist in the band Vicious, is one of my favorite rockstar heroes and that says a lot considering I can’t even keep count of the number of rockstar books that I’ve read.  Anyway, I read Heart Throb and loved the premise of the book and loved the characters.  At the time, I didn’t realize it was book 7 in her Hearts of Metal series.  It definitely could be read as a standalone, but I decided to go back to the beginning where I then decided to stalk this author on IG and Facebook.

Synopsis:
Bassist for heavy metal band,Viciöus, Brand Kife is known for his scowl and inability to form meaningful attachments. When he meets Lexi Adams, the director of the documentary being filmed about Viciöus, Brand wants the smart, sexy woman, but knows he's not worth having. Staying away from the alluring beauty becomes impossible, but he has secrets he'll never share, not even with Lexi.

Lexi Adams wasn’t ready to settle down and may never be. Every time she’d tried to date, the man would want to put his needs first. Her first boyfriend had forced her to choose between him and film school.Her second had wanted her to support his film career. And now that Lexi’s career was finally taking off, she didn’t have time to look for a third. Until Brand Kife, who seems more than happy to keep his distance, until that is impossible and ever more became a reality she embraces with her whole heart and soul.