on November 25, 2018
Happy Sunday!  I know that I missed Friday's Round-Up due to the Thanksgiving holiday, but I didn't want to skip the week entirely.  It's been busy over here with Ellie off from school all week, but I did manage to fit in some reading.  This past week and a half I've read a rockstar romance, a sports/celebrity romance, and 2 paranormal romantic suspense. 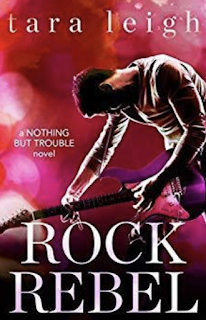 4 stars Rock Rebel  is the 3rd book in Tara Leigh's Nothing But Trouble rockstar romance.  While it is a part of a series, it can be read as a standalone.  However, I do recommend reading the first 2 books as there is some character overlap.  This book is about Dax, the drummer for NbT, and former disgraced childhood star, Verity. Both the characters are extremely likable and make a great couple.  It moves at a good pace and has so many twists and turns that I was entertained until the very end.
Goodreads Review: https://bit.ly/2PDRc5H


Synopsis:
He's a rock star with a secret; she's a pop princess with a painful past, can their forbidden romance survive, or will their lies destroy them both?


A few years ago, I was New York City's hottest classical music prodigy. But I wanted something else, something more. So I chased my real dream, and now... I'm rock royalty. Dax Hughes, lead guitarist of Nothing but Trouble. But to my family and former Juilliard classmates, I'm an outcast. A misfit. A rebel.

They're not entirely wrong. I don't give a damn what other people think, and I'm all for breaking the rules... except when it comes to our new opening act, Verity Moore.

It's not personal. Actually, under that fallen diva reputation, Verity's incredibly talented. And her fiery redheaded personality is... intriguing. But I'm convinced the skeletons in Verity's closet are as scandalous as my own, and when we're not sparring, she has a way of drawing out all those secrets I'm determined to keep hidden.


But since when do I give a damn about the rules? 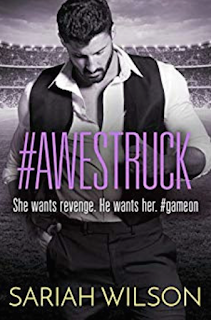 4 stars #Awestruck is book 3 in Sariah Wilson's #Lovestruck series and is a complete standalone novel.  It is a sport romance about Ashton and Evan.  Ashton was publicly shamed by Evan in high school and when she lands a reporting assignment that might destroy him.  However, things are not always as they seem.  What really happened in high school? Will she enact her revenge?  Will there ever be trust and forgiveness between the two of them?  While this book is a bit predictable, it is a good story with likable characters and a few little twists.
Goodreads Review: https://bit.ly/2OWFCgK

Synopsis:
A sweet all-American story of love and revenge.
Ambitious intern Ashton Bailey is about to get closer to her dream of being a sports announcer. All she has to do is prove that too-perfect-to-be-true NFL quarterback Evan Dawson isn’t quite as wholesome as his contract requires. It’s also the perfect opportunity to get delicious payback on the boy who broke her teenage heart. At least that’s her plan. But she forgot just how easy it is to crush on the irresistible charmer. #OhNoNotAgain.
Evan has a knack for getting through the opposing team’s defenses, and he won’t let this tall, redheaded knockout be the exception. He’s determined to make things right between them and earn back Ashton’s trust—and maybe her heart, too.
Then the press mistakenly announces their engagement, and Ashton and Evan find themselves going along with the lie. Now the whole world is watching as Ashton flirts with attraction anddisaster. But while revenge is sweet, it just might come at the cost of something sweeter still. 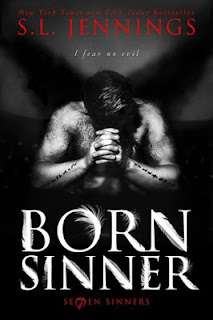 4 stars Born Sinner is book 1 in S.L. Jennings' Se7en Sinners series.  I first discovered this author while reading Such Violent Delights , a holiday anthology of short stories by paranormal romance authors.  I loved her story, Devil's Delight so much that I had to download this book.  It is a fast paced entertaining paranormal romantic suspense with some serious steam, action, shocking twists and turns, and great world building. *This book ends in a cliffhanger, but all 4 books in this series are available now.
Anna's Bookshelf Review: https://bit.ly/2Fw05JO

Synopsis:
Twenty-two years ago, I was cut from a cold, sodden womb, and cradled in the filth and poverty of Chicago’s concrete arms. Statistically, I wasn’t supposed to survive these streets past the age of eighteen. Fate had a different plan.I was bred for one purpose and one purpose only: to unleash death and destruction on my world. My thoughts are power. My words are weapons. Evil created me then grace tried to save me. But first… they tried to kill me. They call themselves the Se7en. They are sin and salvation, and everything we’ve feared from the beginning of time. And their leader is the deadliest of them all. He doesn’t lose. He doesn’t compromise. And most importantly, he doesn’t distract himself with mortal weakness.Not until me. Kill one to save a million. That’s what he told me when he took me as his prisoner. Kill one to save a million.That’s what he’s been trying to tell himself ever since he took me into his arms. 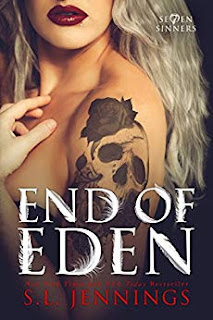 4 stars End of Eden is book 2 in S.L. Jennings' Se7en Sinners series.  It is not a standalone as this books picks up right where Born Sinner left off.  The story continues to be full of action, shocking revelations, as well as the Se7en, demons, the Called, Jumpers, Seraph, and Nephilim. we finally get some hot smutty scenes between Eden and L. The there is Lucifer - oh how I love a villain who is wrapped up in a beautiful package and Nikolai.  *This book does end in a cliffhanger, but all 4 books in this series are now available.
Anna's Bookshelf Review: https://bit.ly/2DQNFux

Synopsis:
I thought I knew what Hell was like.
I thought I had been living it all these years on Earth—abandoned, forgotten, and left with a dangerous secret that not only made me the Se7en’s #1 target but also turned me into a deadly weapon, a threat to every human in my path.

In order to survive Lucifer’s plans for me, and his unquenchable thirst for more power, I have to surrender my humanity. I have to lose a part of myself in order to find my way back to him.
Back to the demon who saved me, only to break me.
Back to Legion.


But even supreme evil has its limits, and the real foes never show their devastatingly beautiful faces.
Forget fire and brimstone. They aren’t shit compared to what’s coming.


Centuries-old bonds will be broken. Unlikely alliances will be forged. And innocent blood will be spilled. Blood that will stain my hands for the rest of my mortal days.

I thought I knew what Hell was like.
I was wrong.
Hell is coming.
Hell is just the beginning.

*End of Eden is book 2 in this author's Se7en Sinners series, Book 1 Born Sinner must be read first.

Next week there will be 2 new releases by Cari Quinn and Taryn Elliot - Rock Redemption which is the conclusion to the Rock Revenge trilogy and Christmas With a Rockstar which is a holiday compilation of stories by multiple authors.  I hope to also finish the rest of the Se7en Sinners series - Wicked Ruin and Fallen Reign