Book Round Up - better late than never!

I know that it isn't Friday and as such this book round-up is a little late, but I have a good excuse.  When I sat down to write this post, I got inundated with phone calls. My daughter was scheduled to have multiple procedures on Friday and the afternoon before two of them got really messed up and nearly canceled.  In the end, it all got worked out, but my writing time disappeared.  On Friday, Ellie Bear had her 4 procedures and is recovering nicely.  So better late than never - the Book Round Up!

This past week I read a romantic comedy, a paranormal romantic suspense, a YA royal novella, and a college sports romance.  Yesterday, I read the funniest book that I have read in a long while - The Catastrophe Queen- so be sure to check out my compete blog post on Tuesday 1/29. 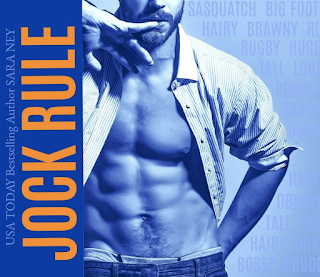 4 stars  This book falls under Sara Ney's Jock Hard series and can be read as a standalone.  This is a sweet, humorous sports romance with endearing characters (especially Sasquatch aka hairy godmother).  Jock Rule moved at a good pace and was very entertaining.  I cannot wait until the next book in this series comes out.

Synopsis:
Kip Carmichael is no pretty boy.He's a rough. Dirty. Giant. Hair so unruly, and a beard so thick, his friends on the team call him Sasquatch.The first time Sasquatch lays eyes on Theodora "Teddy" Johnson across the keg at a party one night on Jock Row, she'd been relegated to the sidelines by her jock hungry "friends."Week-after-week, he watches beautiful but bashful Teddy getting overshadowed, and overlooked. Sasquatch finally broad shoulders his way through the crowd, offering to to be her hairy godmother. But the minute their eyes meet? He's a goner.Teaching her the RULES for winning a jock will be the easy part. Not falling in love with her is going to be a losing game. 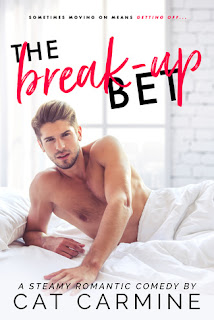 Releases: January 31, 2019
4 stars  I've got a new book boyfriend - Connor.  He is both sexy and charming and of course, would be the perfect boyfriend.  The Break-Up bet is another humorous read with the roommate/brother's best friend theme. Lucy is endearing, quirky, and entertaining with her endless supply of cartoon food-related clothing. Both are trying to get over a break-up and you'll laugh when you read how each try to teach the other his/her methods for moving on.  This is my first book by Cat Carmine and I am looking forward to reading more books by her.  This book releases later this week on January 31st.

Synopsis:
Never make a bet with a man who plays to win...
Especially not a man like handsome, arrogant Connor Pratt.
AKA the huge PITA who’s currently crashing in my spare room.
AKA my brother’s best friend since they were about six.
AKA the one guy who still makes me feel like an awkward tongue-tied loser.
But when Connor moved in, I got a glimpse of another side of him. Because, like me, Connor’s going through a nasty break-up. And, like me, he’s just doing whatever he can to get through it.
Unfortunately, his method involves drinking alarming amounts of whiskey and watching a lot of, um … movies … that make every inch of my skin flush.
I’m just trying to be helpful when I tell him that he should try my way: copious amounts of baked goods, sappy romantic comedies, and late nights spent whining with girlfriends.
But I should have known Connor would take that as a challenge.
Now, he says he’ll try my way of dealing with a break-up … but only if I agree to try his. Six months rent to the person whose method works best.
We call it the break-up bet. And I’m going to win. Except right now, it feels like there’s a whole lot more at stake than just rent money 4 stars  Three of a Kind is Part 3 of Elizabeth Steven's I'm No Princess series and is not a standalone. This is another sweet, humorous read with likable characters.  It is an enjoyable, fast-paced YA/NA novella that will leave you swooning for the serious, crown-prince Dmitri.  I am excited to see how it all ends in the next and final book.

My sister was always the pretty one. She was supposed to marry a prince. Until I came home, the media went into a ridiculous frenzy, and Lia’s no longer good enough for the job.

Marriage Watch is in full effect for the Crown Prince. And, rumours are swirling that I’m on the verge of marrying one of the princes. But, which one?

There’s only one I’d want. But, we fight more than we love and are totally incompatible. Plus, he’s meant to marry a future queen.

And, I’m barely a lady, let alone a princess.

The third in the I'm No Princess Novella Series. Please be aware that this story uses Australian English spelling and syntax. 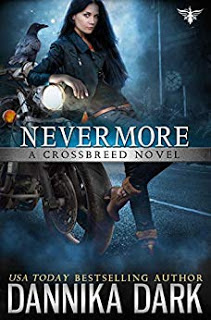 4 stars I never know what to say about Dannika Dark's paranormal romantic suspense books other than I love all of them.  Nevermore is no different.  This author has the unique ability to create intricate storylines with action, suspense, humor, and some hot scenes!  She does a great job with building a world full of humans and breed (vampires, mages, shifters, sensors).  This book is a part of the Crossbreed series and is not a standalone.

Synopsis:
Raven Black risks it all for loyalty and love in this stunning continuation in the USA Todaybestselling Crossbreed series.Raven returns to her childhood home to rebuild her severed relationship with her father. After a long year of capturing violent criminals and thwarting assassination plots, she could use a vacation.But trouble is brewing on the home front. When Raven discovers her father is in financial peril, she’s determined to set things right even if it means sacrificing her heart in the process. Meanwhile, her relationship with Christian is on shaky ground when a skeleton falls out of his closet. Will they be able to leave the past behind, or is the trust between them dead and buried?When the bonds of love are put to the test, only the courageous will prevail.

Released This Past Week: