Friday Book Round Up

I seem to be on a dark romance kick lately as I read 2 dark romances and I am partially through a paranormal romantic suspense - all three I thoroughly enjoyed. 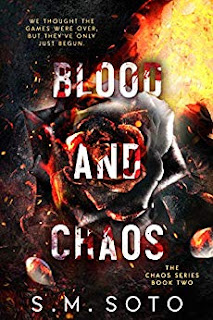 4.5 stars I was first introduced to S.M. Soto when Deception and Chaos was released.  I absolutely fell in love with her writing style and the characters.  (That book has a specific trigger warning mentioned at the end of the blurb.)  It ended in quite the cliffhanger so I was thrilled when I was able to get my hands on an ARC of Blood and Chaos.  My new book boyfriend, Creed, had a much more prominent role in this book and I loved how about 50% of he book was told from his POV.  Sophia remains a strong character, but of course there were times I wanted to shake her.  The book was fast paced, had lots of action, and there were twists and turns.

Synopsis:
We thought the games were over, but they've only just begun...She was the puppet.He pulled the strings.Now the death toll is rising, what could this mean?It was all a game.Of feelings.Of pain.Death is just an illusion, or so they say. She was just a pawn on a piece of his demented board. But there's only one question left to settle the score…Can dead people really stay dead?

For those of you who follow this blog or my reviews on Amazon/Goodreads, you know that I don't post reviews lower than 3 stars.  I loathe slamming authors as what I like vs what others like can be vastly different (read How I Determine Star Reviews at top of this blog).  As of today, in the past year (that's nearly 200 books read), I've only shared one 2 star review and today, my first ever 1 star review and that is because it isn't the author's writing, but rather something that I have deemed highly inappropriate - romanticizes abuse and/or rape -  and both happen to fall into YA/NA dark romance category. 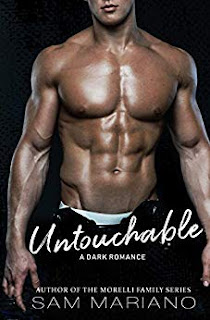 1 star This book has been compared to some of my favorite authors of YA/NA dark romances and that is why I downloaded it. Honestly, Untouchable should be labeled as a novel that romanticizes rape instead of a bully novel.  I was excited to read the synopsis of this book and the opening scene devastated me. I tried to push through it to see if it would get better, but I just couldn't. I will admit that I fully read the first quarter of the book and then skimmed the rest of the book. I love dark romances and I am used to there being violence, twisted characters, rape/abuse (never btwn the anti-hero/heroine), etc, but I was not prepared for this book even with the author's warning.  My issue is that it romanticizes rape.

Spoiler: In Untouchable, the heroine is cornered by 3 football players. In a way of payback, they force her into some inappropriate sexual advances that she protests. The leader of this group, Carter aka anti-hero, forces her to suck his cock all while she is saying no, begging him to stop, and fighting it. That is rape. There are other similar scenes, but not so drastic scenes in the book as well.  How she goes on to fall in love with him is beyond me. I just can't wrap my mind around it.  So here you have an 18 year-old rapist who is obsessed with the heroine, she falls in love with him, and they go on to have a relationship. Is this what should be portrayed to young adults as an acceptable relationship!?!?  I'm sorry, but no!  I will say that the author did give a warning that the content is indeed dark and may have triggers,  but I feel like there should have been a more specific warning, especially in the blurb and not just the bigger warning front of the book where one wouldn't see until after purchasing.

All of that being said, even though I do not recommend the book,  about 3/4 of people have given this book 4-5 star reviews so if you want to check it out, I have the purchase link below.

Synopsis:
The bully isn't supposed to win...Senior year was off to a rough start: lube in my locker, panties on my front porch, unimaginative name-calling. See, I got a player suspended from the football team for harassing me, and in my small Texas town, you don’t mess with the football players—even if they mess with you first.I didn’t care if it was an unpopular thing to do; I stood up for myself… and in doing so, opened Pandora’s Box.I never dreamed I would attract the attention of locally worshipped star quarterback, Carter Mahoney. Never imagined his coveted attention would turn out to be such a nightmare. Beneath his carefully constructed façade lurks a monster, a predator looking for the perfect prey to play with. Now, since I’m the girl no one likes or believes, I guess I’m the perfect target for his dark games and twisted desires.After surviving my first encounter with his casual depravity, all I really want is for Carter to leave me alone.But all he seems to want is me.WARNING: This book is provocative. It is categorized as DARK ROMANCE for a reason. If you are a reader with certain triggers or sensitivities common to the dark romance genre, PLEASE heed the author’s note at the beginning of this book. 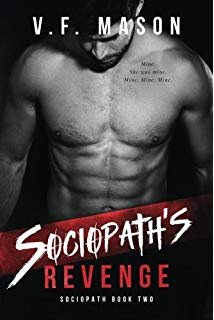 4 stars  Sociopath's Revenge is book 2 and the conclusion of the Sociopath Duet.  Book 1, Sociopath's Obsession must be read first.  V.F. Mason has quickly become one of my favorite authors.  This is my 5th book by her and I plan to read all of her books soon.  This is a good twisted dark romance.  Sociopath and Sapphire encounter so many obstacles.  Sociopath/Damian is that anti-hero that you hate to love.  There is descriptive violence, lots of action, and shocking twists and turns.  I'd love to say more about another character, but I don't want to spoil book 1 for those who have not yet read it.

Synopsis:
Mine.
She was mine.Mine. Mine. Mine.SapphireThe future finally started to brighten up for me. Memories of the past didn't belong in my life.The nights held nightmares, but I learned to deal with them.Until he showed up, once again shattering any peace I had.SociopathIn the hopes of destroying Sociopath, my enemies hurt and used my only weakness.Sapphire.My Sapphire. The time had come for my ultimate revenge, so those who wronged us would answer for every scar and pain they’d inflicted. 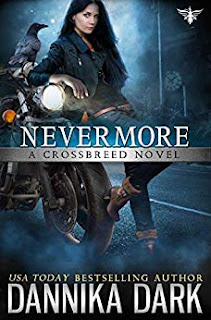 Not Yet Rated: I am about 60% of the way through Nevermore and I can't put it down!  I have read all of this author's books and she is one of those where I one-click without even reading the book's description.  You must read the previous books in her Crossbreed series for Nevermore to make sense.  Raven is still a pretty bad-*ss heroine.  I cringed and gasped when she pulled something that I couldn't believe - I mean, she is smarter than that!  Christian, oh sigh.  He is another book boyfriend of mine who likes to blow hot and cold and has some secrets.  This is a paranormal romantic suspense so you do have mages, vampires, shifters, etc as well as lots of action and suspense.

Synopsis:
Raven Black risks it all for loyalty and love in this stunning continuation in the USA Todaybestselling Crossbreed series.Raven returns to her childhood home to rebuild her severed relationship with her father. After a long year of capturing violent criminals and thwarting assassination plots, she could use a vacation.But trouble is brewing on the home front. When Raven discovers her father is in financial peril, she’s determined to set things right even if it means sacrificing her heart in the process. Meanwhile, her relationship with Christian is on shaky ground when a skeleton falls out of his closet. Will they be able to leave the past behind, or is the trust between them dead and buried?When the bonds of love are put to the test, only the courageous will prevail.

The Crossbreed Series
Purchase Links for Each Book

In addition to Dannika Dark's Nevermore, the following books were just released...


Releasing Next Week:
Blood and Chaos by S.M. Soto

Guardian Queen by Dana Marton
(I've been waiting THREE years for this book! Preparing to  re-read the 2nd book her Hardstorm series.  Start the series with Reluctant Concubine.)