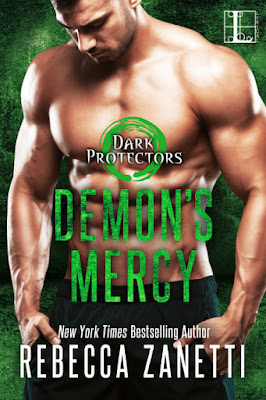 Though he has vampire, demon, and Viking blood rushing through his veins, Ivar Kjeidsen’s soul-crushing trip to hell broke him in ways he can barely fathom.  One vow keeps the deadly immortal standing: To rescue the vampire brother who had sacrificed freedom for him.  To do that, Ivar needs the help of a brilliant physicist with wary brown eyes, fierce brilliance, and skin that’s way too soft.


Dr. Promise Williams understands the underpinnings of the universe but has never figured out the human beings inhabiting it.   Her function is to think—and not feel—until she’s touched by a vampire who’s nowhere near human. The primal hunger in his eyes awakens feelings in her that defy calculation. As she shows him the way to step between worlds, he brands her with a pleasure that could last more than a lifetime . . .

Review:
4 stars  Demon’s Mercy is a fast paced, paranormal romantic suspense.  It is a part of this author’s Dark Protector series and I would recommend reading them in order for this book to make sense and to avoid spoilers.

Demon’s Mercy is the story of Logan Kyllwood, the younger brother of Zane and a hybrid demon-vampire. He is the ultimate hot, alpha, protective hero.  In some areas, I did feel like he was overprotective of Mercy and his bossiness got a little redundant, but I did love this sexy man.  Mercy is Fae (yes, a new species that hasn’t been present in the other books).  She is one of the 3 keys that the Seven is searching for. She is a strong, stubborn character who is torn between her duty to her people and her love for Logan.  I loved how hard core she was.  She is determined, brilliant, and has no trouble defending herself.

This book has a lot of action with good fight scenes, teleporting, inventive weapons, and alternate dimensions.  In Vampire’s Faith (the previous book), we learned little bit about the Seven.  In this book, the Seven is expanded upon - both the other members of the Seven are further developed as well as the purpose of these warriors.  There is some intrigue when it comes to discord between what the Seven believe and what the Fae believe about the dimensions and if inducting Logan into the Seven is necessary vs. catastrophic.

While this book has great world building and hot chemistry between Logan and Mercy as well as great suspense, I felt that parts of this book were a little redundant - such as the number of times Mercy attempted to run from Logan.  I really enjoyed getting to see some of the characters from the previous books, especially Garrett and Sam. There are a few chapters from Hope’s POV and I am seeing a ton of similarities between her and Janie.  I am hoping that the author does a little twist on this. One of the things that I would like to see in this author’s future books is a family tree as there are so many characters in this series that I can’t remember who is mated to who.  Overall, I really enjoyed this fast-paced book and I am looking forward to the next one in the series.  I received this book as an ARC and I voluntarily leave this review.