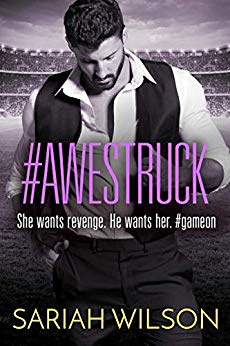 #Awestruck is an all new, standalone sports romance in Sariah Wilson's #Lovestruck series.  You will love Ashton and Evan's story!

Synopsis:
A sweet all-American story of love and revenge.
Ambitious intern Ashton Bailey is about to get closer to her dream of being a sports announcer. All she has to do is prove that too-perfect-to-be-true NFL quarterback Evan Dawson isn’t quite as wholesome as his contract requires. It’s also the perfect opportunity to get delicious payback on the boy who broke her teenage heart. At least that’s her plan. But she forgot just how easy it is to crush on the irresistible charmer. #OhNoNotAgain.
Evan has a knack for getting through the opposing team’s defenses, and he won’t let this tall, redheaded knockout be the exception. He’s determined to make things right between them and earn back Ashton’s trust—and maybe her heart, too.
Then the press mistakenly announces their engagement, and Ashton and Evan find themselves going along with the lie. Now the whole world is watching as Ashton flirts with attraction anddisaster. But while revenge is sweet, it just might come at the cost of something sweeter still.

Review:
4 stars #Awstruck is an entertaining sports romance in Sariah Wilson’s #Lovestruck series and it can be read as a standalone.  While the story is somewhat predictable I enjoyed this witty, humorous, romantic book. Ashton is a dedicated and humorously sarcastic heroine.  I loved her as a character.  She is pursuing a career that is dominated by men and seizes an opportunity that will help her get ahead all while enacting revenge on the star quarterback and her former tormentor, Evan.  Evan aka “Awesome Dawson” is quite the gentleman in that he is kind, loving, romantic, sexy, and supportive of Ashton. Evan was portrayed as the perfect gentleman and at times he almost seemed too perfect to me.  Nonetheless, I loved his character and he would be the ideal book boyfriend. The question is, is Evan truly what he seems?  The two of them together make a great couple - they compliment each other in every way and you cannot help but want them to get their HEA.

Two things that I would have liked to have seen in the book are 1. an epilogue and 2. a few chapters from Evan’s POV as I would have enjoyed getting a glimpse of his thoughts and emotions.  #Awestruck moves at a good pace with no parts that lag.  I loved the secondary characters - especially Ashton’s sisters and Nia. This book has a HEA with no cliffhanger.  I received this book as an ARC and I voluntarily leave this review. 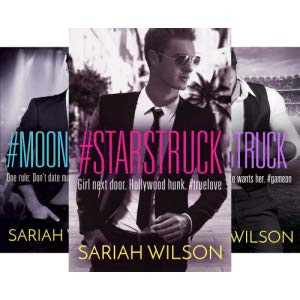 Other Books in #Lovestruck series:

Sariah Wilson has never jumped out of an airplane, never climbed Mt. Everest, and is not a former CIA operative. She has, however, been madly, passionately in love with her soulmate and is a fervent believer in happily ever afters—which is why she writes romance. She grew up in southern California, graduated from Brigham Young University (go Cougars!) with a semi-useless degree in history, and is the oldest of nine (yes, nine) children. She currently lives with the aforementioned soulmate and their four children in Utah, along with three tiger barb fish, a cat named Tiger, and a recently departed hamster that is buried in the backyard (and has nothing at all to do with tigers). Sariah's book ROYAL DATE was selected as one of the first winners in Amazon's Kindle Scout program and is Kindle Press's most successful author to date. She has sold five books to Montlake Romance, three to Kindle Press and helped launch Amazon Publishing's Kindle In Motion technology with her latest release, ROYAL DESIGN. She was given her own Kindle World for THE ROYALS OF MONTERRA. Sariah has repeatedly hit Amazon's overall Top 100 (both in and outside the U.S.) and been a #1 bestseller on Amazon category lists multiple times. Her books have been featured in USA TODAY and GLAMOUR UK.