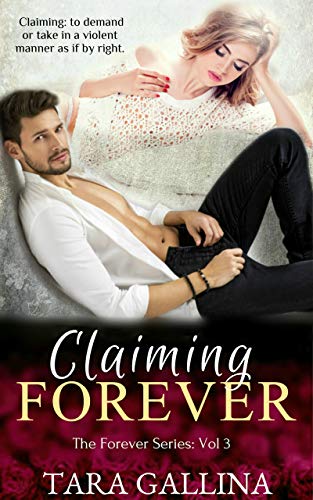 Synopsis:
The final installment to the Forever Series—for now.
It happened. I knew it would. I fell for him. The revelation didn't rise within me like an orange sun emerging from the ocean. This wake-up call was more of a slap to the face. And now that it's out, the silence from Sebastian has me wondering if I've lost my hearing.
What did I expect, for him to love me back? He's made it clear since the beginning that can't happen. This is on me. Walking away would be the smart choice. I have dreams to follow, and a new life to start far away.
If only I could take Sebastian with me. If only I could convince him the risk is worth the reward. If he knew he could escape his father without harm, he'd go. Not just for me but for himself. He may not love me, but he cares. I wouldn't have given myself to him, if I had thought otherwise. ~ Ainsley
ABOUT THE SERIES
At twenty, Ainsley knows it’s time to follow her own dreams and not the future her that was planned for her—a future she never wanted. Losing her job couldn’t have come at a worse time.
Sebastian Gianni isn’t the ideal boss, but he has a position to fill and Ainsley is desperate. The sexy twenty-two-year-old comes from money, owns a successful business, and graduates from college in three months. He has his life together in a way Ainsley could only dream.
No wonder her best friend is obsessed with dating him. Even his ex-girlfriend is determined to get him back, although threatening him seems like the wrong approach. Ainsley would be a fool to fall for the guy, too.
By no means, should she trust him. He has more secrets than anyone she knows, which makes her wonder if the mafia rumors about him are true. It doesn’t matter that he’s a good listener, and sweet and protective at times. That playful flirty side he shares with her alone means nothing. Right?
When a kiss turns into a secret romance neither can give up, Ainsley learns the truth about Sebastian’s corrupt family and why his ex-girlfriend won’t go away. A future together is near impossible and comes with a risk that could get them both killed—or give them everything they’ve ever wanted.
Genre - New adult college romance, app 160pgs ea.
The Forever Series Collection
Risking Forever
Daring Forever
Claiming Forever
Sebastian – Risking Forever

Claiming Forever is a serial novel and one of three installments in the Forever Series. The story is continuous and meant to be read in sequential order.

Review:
4.5 stars Claiming Forever was a great conclusion to Sebastian’s and Ainsley’s story!  This a serial NA / college romance so the first 2 books need to be read first [see info and review below]. These two do not have an easy path to their HEA. Sebastian is still constrained by family obligations that he does not want to be involved in. Ainsley wants to be true to herself and make her own path.  The two of them have a deep understanding of each other and care deeply for one another- the makings of what would be a perfect romantic relationship and I could not help but want them to get their HEA.  There were many moments where my heart ached for the two of them - esp for Ainsley! Would you start a relationship if you thought it was doomed before it ever really began? Will they and do they need to be able to walk away from each other?  Claiming Forever is a story about love and taking chances. This is a fast pace novel with  more suspense and action than the previous two books and all loose ends are tied up.  There is a book told from Sebastian’s POV that takes place at the same time as Risking Forever and during the first part of Daring Forever which I definitely plan on reading next!