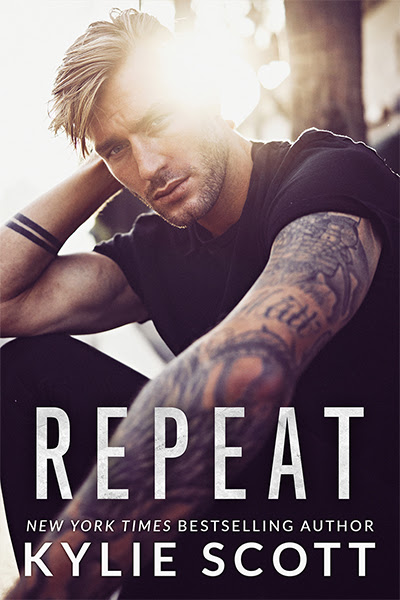 "A page-turning romantic feast that will have you desperate for more. I was immediately hooked." —#1 New York Times bestselling author Rachel Van Dyken

"Kylie Scott has long been one of my favorite authors, and oh, did she crush it with Repeat! I loved every page. Witty, swoony, sexy romance weaved in a mystery that will have you hooked. This one goes to the top of my 2019 favorite reads." —A.L. Jackson, New York Times and USA Today bestselling author

When a vicious attack leaves 25-year-old Clementine Johns with no memory, she's forced to start over. Now she has to figure out who she was and why she made the choices she did - which includes leaving the supposed love of her life, tattoo artist Ed Larsen, only a month before.

Ed can hardly believe it when his ex shows up at his tattoo parlor with no memory of their past, asking about the breakup that nearly destroyed him. The last thing he needs is more heartache, but he can't seem to let her go again. Should they walk away for good, or does their love deserve a repeat performance?


Grab your copy of REPEAT today! 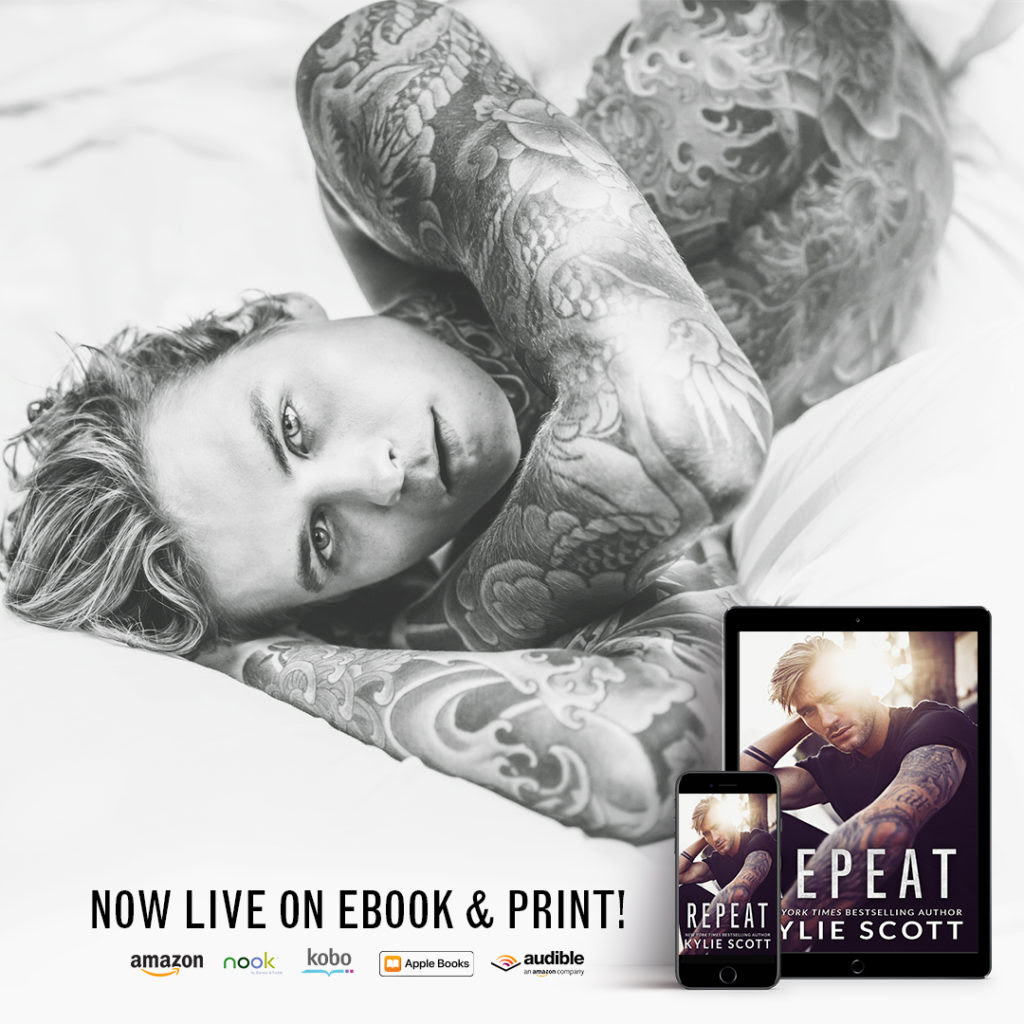 Review:
4.5 stars  This book is very different from the other books that I have read from this author and it was amazing!  Repeat is a novel that I continued to think about for days after I finished reading it and is a different take on a second chance romance.  For starters, the heroine, Clem has amnesia and doesn’t remember the important people in her life.  This means she doesn’t remember Ed or why they broke up.  With her frontal lobe injury, she has lost her filter and I love how she just says what is on her mind.  She is a great heroine. She is strong and resilient - to have survived a vicious attack and how she tries to get on with her life.  Ed deeply loved Clem when she broke his heart.  He is such a sweetheart. Even though she crushed his heart, he is still super protective of her and clearly cares about her. One cannot help, but love him.

This fast-paced book kept me entertained into the very end.  I wanted to know why they broke up. I wanted to know if her attack was an isolated incident or if she was targeted and if so, why.  Repeat was a beautifully written book that has wonderful characters that you find yourself cheering on all while experiencing a bit of intrigue and suspense.  I thoroughly enjoyed this book and I am looking forward to more of this author’s books. I received Repeat for free. 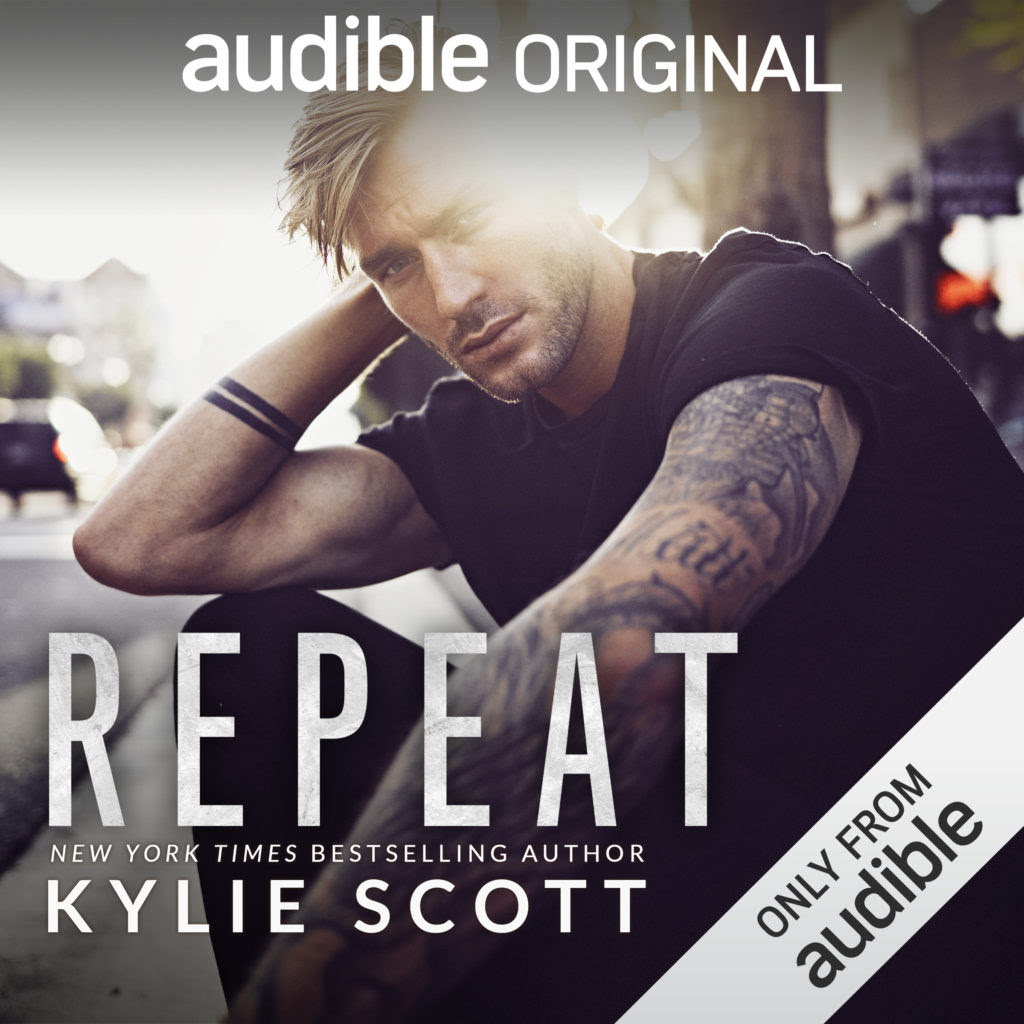 "This book. You need this book. Repeat is everything I wanted in a romance. I was not expecting the delicious intensity, the amazing heroine, the delicious hero, and the banter only Kylie Scott can write. This book is pure magic." —L.J. Shen, USA Today bestselling author 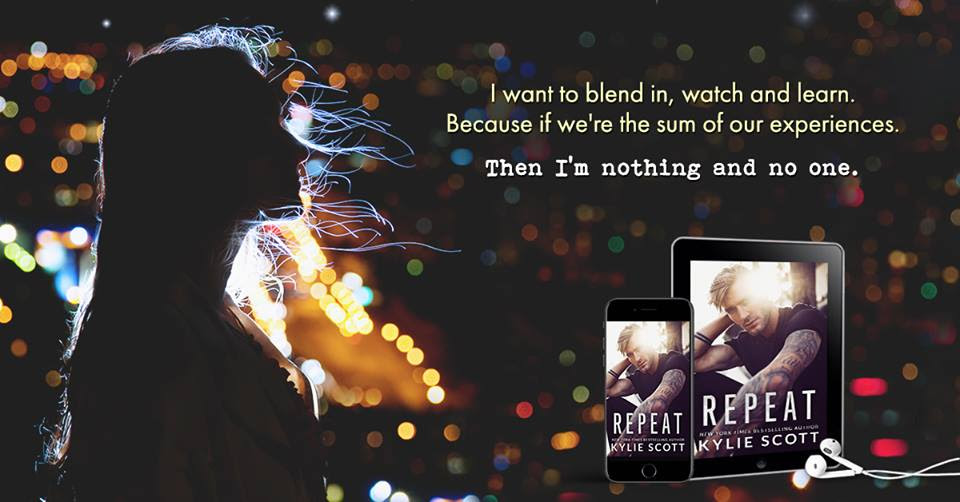 “Amnesia,” he mutters for about the hundredth time. Usually, ‘fuck’, ‘shit’, or some blasphemy follows that statement. This time, however, there’s nothing. Maybe he’s finally getting used to the idea.
I sit on the opposite side of the booth, inspecting the cocktail menu. It’s as gross and sticky as the table.
“Can I get you guys something else?” asks the waiter with a practiced smile.
“I’ll have a piña colada.”
“You hate coconut,” Ed Larsen informs me, slumped back in his seat.
“Oh.”
“Try a margarita.”
“What he said,” I tell the waiter, who presumably thinks we have some kinky dom-sub thing going on.
Ed orders another lite beer, watching me the entire time. I don’t know if his blatant examination is better or worse than my sister’s furtive looks. He’d suggested going back to his place to talk. I declined. I don’t know the guy, and it didn’t feel safe. So instead we came here. The bar is dark and mostly empty, given it’s the middle of the afternoon, but at least it’s public.
“How old are you?” I ask.
In response, he pulls his wallet out of his back pocket and passes me his driver’s license.
“Thank you.” Information is good. More definites. “You’re seven years older than me.”
“Yeah.”
“How serious were we? Did we stay together for long?”
He licks his lips, turns away. “Don’t you have someone else you can ask about all this? Your sister?”
I just look at him.
He frowns, but then sighs. “We saw each other for about half a year before moving in together. That lasted eight months.”
“Pretty serious.”
“If you say so.” His face isn’t happy. But I need to know.
“Did I cheat on you?”
Now the frown comes with a glare.
Despite his don’t-fuck-with-me vibes, it’s hard not to smile. The man is blessed in the DNA department. He’s so pretty. Masculine pretty. I’m not used to being attracted to people, and he’s giving me a heart-beating-harder, tingles-in-the-pants kind of sensation, which is a lot new and a little overwhelming. Makes me want to giggle and flip my hair at him like some vapid idiot.
But I don’t. “It’s just that I’m getting some distinct vibes that somehow I’m the bad guy in all this.”
“No, you didn’t cheat on me,” he growls. “And I didn’t cheat on you either, no matter what you might have thought.”
My brows jump. “Huh. So that’s why we broke up?”
“This is fucked. Actually, it was fucked the first time.” He turns away and finishes the last of his beer. “Jesus.”
I just keep quiet, waiting.
“You have no memories, no feelings about me whatsoever?”
“No, nothing.”
A muscle jumps in his jaw, his hands sitting fisted on the table.
“It’s called traumatic retrograde amnesia,” I say, trying to explain. “What they call my ‘episodic memory’ is gone—all my memories of events and people and history. Personal facts. But I can still make a cup of coffee, read a book, or drive a car. Stuff like that. Things that were done repetitively, you know? Not that I’m allowed to drive at the moment. My car’s sitting outside my sister’s house gathering dust. They said to give it some time before I got behind the wheel again, make sure I’m okay. Also, apparently the part of my brain in charge of inhibitions and social restrictors, et cetera, is a bit messed up, so I don’t always react right, or at least not necessarily how you’d expect me to behave based on previous me.”
“Previous you?”
I shrug. “It’s as good a label for her as any.”
“She’s you. You’re her.”
“Maybe. But she’s still a complete stranger to me.”
“Christ,” he mutters.
This is awkward. “I’m upsetting you. I’m sorry. But there are things I need to know, and I’m hoping you can help me out with some of them.”

Kylie is a New York Times and USA Today best-selling author. She was voted Australian Romance Writer of the year, 2013 & 2014, by the Australian Romance Writer’s Association and her books have been translated into eleven different languages. She is a long time fan of romance, rock music, and B-grade horror films. Based in Queensland, Australia with her two children and husband, she reads, writes and never dithers around on the internet. You can learn more about Kylie from http://www.kylie-scott.com/