Blog Tour: THE MOTH AND THE FLAME by B.B. Reid

The Moth and the Flame returns to the world of Blackwood Keep, rival gangs, and deliciously flawed yet completely addicting characters!

The Moth and the Flame, the second romantic standalone in the When Rivals Play series by B.B. Reid is LIVE!

THE FLAME
Here lies Louchana Valentine. She was a homeless, orphaned virgin.
I never cared what my gravestone would say until I landed in deep with a powerful gangster. Lucky for me, my best friend happens to be ruthless too. I should feel guilty that he’s forced to turn on the man who’s been a father to him. Except I’ve always known that Wren’s soul wasn’t as black as he claimed.
He was good.
He was beautiful.
He was mine.
He just didn’t know it yet.
And with Wren keeping me safe, I’ve got time left to rewrite the end of my story. But if he has his way, virgin is already carved in stone.

THE MOTH
I’ve never known anyone as alluring as Lou. Or as frustrating. Since the night she saved my life and stole my wallet for her troubles, I couldn’t stay away.
She became my onus.
My light.
My…anyway.
With nowhere to run, I’m forced to trust someone I never expected. At least with Lou safe in Blackwood Keep—far away from me—I’ll die with my conscience intact. Because she no longer looks at me with friendship in her eyes. Those iridescent blues shine with a different need entirely, and I’ve never been able to deny her.

It is strongly advised that you read The Peer and the Puppet before diving into The Moth and the Flame. Content suitable for ages 18+.

Read The Peer and the Puppet today!
Only 99 cents for a limited time. Available FREE with Kindle Unlimited.
Amazon US → https://amzn.to/2H2JThM
Amazon Univ → https://geni.us/peerpuppetBBR 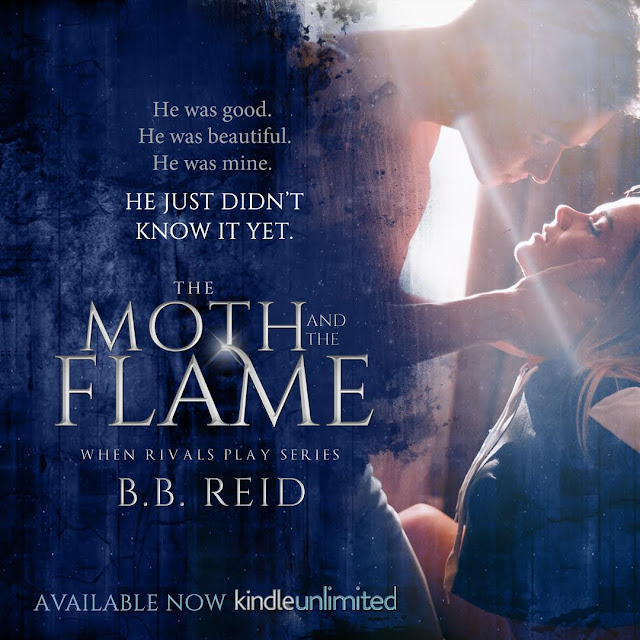 4.5 stars  This engaging best friend-to-lovers novel is book 2 in the When Rivals Play series and is the story of Wren and Lou.  The Moth and the Flame sucked me in from page one.  This is a semi-dark romance full of intense chemistry as well as action, suspense, and secrets.  True to this author’s previous books, you’ll be reading a long thinking you have an idea on what is going on and then a twist is thrown in. I love how the The Moth and The Flame starts with how Wren and Lou two met (with a literal bang!), spans over about two years, and illustrates how strong and deep their connection is.  The characters are strong and likable, but there are also damaged and flawed. They do things and behave in ways that make me want to shake them, but then I also want to turn right around and hug them. Many times my heart broke for both Wren and Lou, but I also had my moments of laughing and joy.

Lou is a scrappy girl who had a rough childhood.  I love how spunky she is.  She  stands up for herself and she loves Wren fiercely.  She has fear of abandonment and you can see it play out in some of her reckless actions and in her relationship with Wren and others. At times, I was pretty annoyed with her -  she was occasionally immature and childish, but it is fitting with her age (she is still a teenager) and her past circumstances.  I will say that she is perhaps that character that has grown or evolved the most in the book.

“I am the moth to your flame, Lou.  I’d rather be burned a thousand times than be free of you”


Wren is wise beyond his years. His childhood was tainted The Exiled, a gang that he is now a member of.  I really love how the author shows that while he is a member of a violent gang and has done some bad things, he has a big, good heart  You can feel how much he loves Wren  and how he also fears losing her given a secret he has.  Even with how much he understands Lou and cares for her, I don’t agree with the times he just disappears which feeds into the her fears.  Still, no one would question his feelings for Lou and he has had to make some tough, very adult decisions in his life.

Towards the last half of the book, we get to see Ever, Four, and Jaime  from The Peer and The Puppet, which I really liked. This is the point where the stories start to interconnect more.  We learn more about The Exiled and shocking secrets are revealed.  While we have some answers, not all loose ends are tied up.

While this book has different main characters than the previous book, I would not characterize it as a standalone as there are interconnecting storylines.  I knocked a 1/2 star off because while this book moved at a great pace and had good flow, it was long and I think the first half could have been shorter.   I really enjoyed The Moth and The Flame as author does a great job with developing hard-edged characters that have depths and flaws as well as an engaging, unique plot that had me eagerly flipping page to page.

B.B. Reid is a bestselling author of new adult romance. She grew up the only daughter and middle child in a small town in North Carolina. After graduating with a Bachelors in Finance, she started her career at an investment research firm while continuing to serve in the National Guard. She currently resides in Charlotte with her moody cat and enjoys collecting Chuck Taylors and binge-eating chocolate. Please visit her website for more information: www.bbreid.com