HIGHSIDE: A Novella by Lizzie A. Williamson 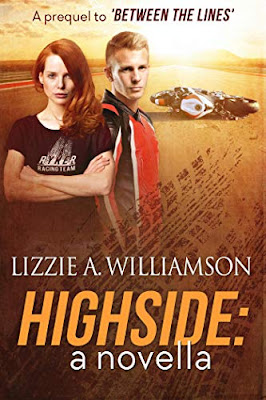 Breanna O'Donnell is a hard-nosed businesswoman, and her childhood makes sure of it. The abuse from her father seems endless until she and her twin brother, Finn, are saved by the Mitchell family. It's under their loving care, surrounded by their five children, that she understands love can come without pain.
Jesse Mitchell teaches Brie true love is no fairy tale. He has always been the confident MotoGP rider, even when circumstances leave him broken. As long as he has Brie, he's sure everything will be okay - until she reveals she's keeping a bombshell of a secret from him.
Despite their misgivings, Brie is still willing to give Jesse the world, until the one thing she can't forgive sends her running.
Every story needs a beginning, and this is just the start for Jesse and Brie.
This book is not a HEA - it is a backstory for the upcoming "Between the Lines" series.

Highside is this author’s debut novella and the writing is superb.  The storyline is engaging and there is good flow between the chapters.  While this is a short novella, the characters are relatively well developed and there is a fair amount of meat to the story.  Highside is told from a dual POV and I like how the present is from Breanna’s, but the past is told from Jesse’s.  It was a great way to see how their relationship started and evolved.  I don’t want to spoil the novella, but there is a pretty big secret that Breanna is keeping from Jesse and Jesse pulls a pretty big stunt which gives it just the right amount of drama without being over the top or full of angst.  This novella is a prequel for the author’s Between the Lines sports romance series so it paves the way for the next book and gives you hope for that elusive HEA.

Lizzie A. Williamson was born and raised in the outskirts of Boston. She began writing very early, putting together a book made of scrap paper at just six years old. She enjoys hockey, MotoGP, and sleeping. Especially sleeping.