OFFSIDES by Lizzie A. Williamson 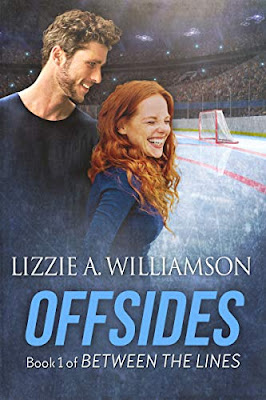 Brie tried to escape her past but soon learns that healing comes from facing it.

Breanna O'Donnell lost everything; her reputation and her career the day Jesse Mitchell turned on her. She never expected him to betray her but then when it comes to love, Brie's still a novice.
Needing a fresh start, she moves to Uppsala, Sweden hoping to heal her shattered heart. It only takes a brief time before Brie doubts her decision. She's in a foreign country with a barely a grasp of their language and completely alone until she meets Mirek.

Hockey player Mirek Sztasko's whole career is up in the air when a serious knee injury puts his entire hockey future in doubt. Hockey is the only thing he's ever known, it defines him, it drives him. Brie is unlike any woman he's ever known. She intrigues and captivates him from the get-go.

As their new love starts to build, a ghost from Brie's past threatens to ruin it all.

Can two broken souls be healed when all else is lost?

Offsides is a sports romance that features features two beautifully broken characters who find love.  I adored Mirek and found him to be the perfect book boyfriend.  An injured hockey player, he is struggling to return to the sport that he loves.  He is that perfect combination of sexy and sweet.  I love how patient and understanding he is with Brie as she tries to overcome her previous heartbreak.  Brie is a strong character in that that she lost everything, but still tries to move forward and pick up the tattered pieces of her heart and start over with her career.  The two of them together make a great couple and I enjoyed watching their romance develop as well as watch the two of them grow individually as characters.  This is a quick read that is relatively low on drama and has very likable, well developed characters.  I received Offsides for free and I am looking forward to more works by the author.