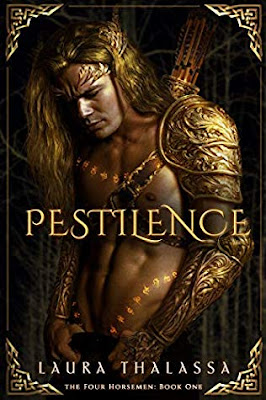 *note: this author has written YA novels in past, Pestilence is NOT a YA romance.*

They came to earth—Pestilence, War, Famine, Death—four horsemen riding their screaming steeds, racing to the corners of the world. Four horsemen with the power to destroy all of humanity. They came to earth, and they came to end us all. When Pestilence comes for Sara Burn’s town, one thing is certain: everyone she knows and loves is marked for death. Unless, of course, the angelic-looking horseman is stopped, which is exactly what Sara has in mind when she shoots the unholy beast off his steed.Too bad no one told her Pestilence can’t be killed. Now the horseman, very much alive and very pissed off, has taken her prisoner, and he’s eager to make her suffer. Only, the longer she’s with him, the more uncertain she is about his true feelings towards her … and hers towards him. And now, well, Sara might still be able to save the world, but in order to do so, she'll have to sacrifice her heart in the process.

This is my first book by this author and I am thoroughly impressed with her writing style.  I am not normally one to  read a post-apocalyptic book, but the intriguing premise of this story as well as several recommendations from others are made me pick up this book.  I love the uniqueness of the storyline and the author does a great job with world-building.

Sara is a heroine who drew the literal short-end of the stick and is tasked with killing Pestilence.  Only, not all goes as planned. I love how selfless and caring she is because she knew attacking Pestilence would lead to her death and you could see her compassion and empathy as she would encounter the plague victims. It was interesting to watch her struggle with her developing feelings of love towards Pestilence.  I mean, he was killing mankind and she had a front row seat watching as the Plague would wipe through entire cities.

Pestilence is that type of anti-hero that you really want to hate, but then you end up loving him. He is the harbinger of death, sent by God to eradicate mankind. Yes, he is determined to fulfill his destiny of spreading illness and sparing no-one, but there is so much more to him.  I loved watching him evolve as a character.

While you would think religion plays a big role in this book, there is no focus on one particular religion - just that God has sent his horsemen to enact the apocalypse.  It was interesting to see how the end of days was bringing out the worst in people, but you could still the goodness as well. I really enjoyed this enemies-to-lover romance in that it had an entertaining plot, moved at a good pace, and had well developed characters.  The author’s writing is exceptional in how to weaves the love story of Pestilence and Sara.  I am definitely looking forward to more books by this author. 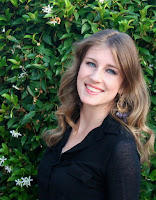 Found in the forest when she was young, Laura Thalassa was raised by fairies, kidnapped by werewolves, and given over to vampires as repayment for a hundred year debt. She’s been brought back to life twice, and, with a single kiss, she woke her true love from eternal sleep. She now lives happily ever after with her undead prince in a castle in the woods.… or something like that anyway.When not writing, Laura can be found scarfing down guacamole, hoarding chocolate for the apocalypse, or curled up on the couch with a good book.Never want to miss a release? Sign up for my newsletter HERE Like to discuss my books? Join my Goodreads fan page HERE or my Facebook fan page HERE