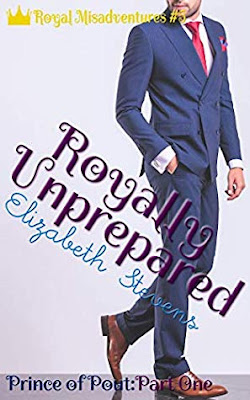 One divided heart.
Only one real choice.
A prince unprepared for the fallout.
It’s time for me to announce my engagement to the people of Gallyr, to bow to tradition and the expectation of an entire country as their future King Dmitri Bertold Brevich.
As they have been my whole life, all eyes are on me and they wait with baited breath to hear my decision. No matter who I choose, I’ll disappoint someone.
I was told to follow my heart, so I did and there are plenty of people ready to give me their opinion of my choice. Even more than I expected.
Not even Heaven can help me now.

I thoroughly enjoyed the I’m No Princess novellas, which are about the spirited and somewhat clumsy Tati so I was thrilled to discover that this author was releasing a novella featuring Dmitri’s POV.  Royally Unprepared has some timeline overlap with the end of Some Proposal (but from The Prince of Pout’s POV) and then the storyline progresses to further into the future.  This novella has the right amount of humor, political machinations, and romance making it a quick, entertaining read.

I found Dmitri to be absolutely charming.  I loved him in the previous novellas, but reading about his first impressions of Tati and then seeing how much he loves her made me adore him. He came across as relatively serious in the INP novellas and so it was good to see behind that mask he presents to others. It was also interesting to see some of the more political aspects with him being the crown prince - the rebellion, views of the crown’s stability, how royal responsibility dictate parts of his personal life, and how even though he is marrying for love, there is still great influence from the crown, the public’s perception of things, and even family.  Dating in the public eye and when you have monarchy responsibilities is not for the faint of heart!

While this novella is from Dmitri’s POV, I enjoyed the fair amount of appearances from Tati as well as from their respective family members, the ever hilarious friends Jenn and Bea, as well as the snarky Amanda and the occasionally cantankerous General Arnell.  I received Royally Unprepared for free and I am looking forward to the future books in this author’s Royal Misadventures series.

Writer. Reader. Perpetual student. Nerd.
I started out writing fantasy. But, I like to write anything, honestly. These days, I mainly stick to YA and there's always at least a sprinkling of romance, if not a 'whoops, I dropped the whole packet in'. Almost all my books are set in my home state of South Australia, either in real or fictional places - gotta write what you know - with Netherfieldbeing the only current exception.
Like most writers, I love to read. Although, time for reading at the moment is hard to come by. When I'm not too busy writing, I'm usually reading a number of authors.