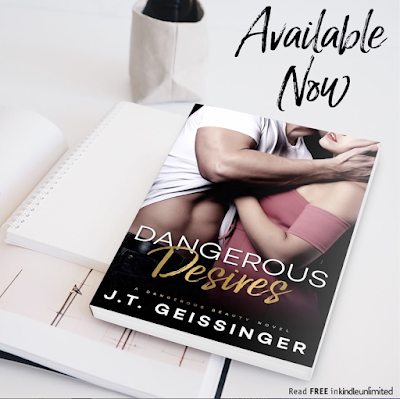 He’s everything she has ever desired. But there’s only one way to keep her man alive: let him go.


With Nasir’s life on the line, Eva makes a deal with the devil. She slips away to return to Dimitri, the mob boss who held her captive for years, only to step into a new world of trouble. Abducted by one of Dimitri’s most cunning adversaries, Eva finds herself an unwitting pawn in a dangerous game of cat and mouse.

When Eva disappears, Naz is prepared to do anything to find her. Tracking her to the remote regions of Portugal is just the beginning of the hunt. Bewitched by Eva’s beauty, the darkly seductive spy who abducted her now has more than business on his mind, but the only way for the trio to defeat Dimitri is to work together…despite the explosive desires threatening to consume them.
With a game so deadly and the stakes so high, Naz and Eva’s love will be tested in ways neither of them could foresee…or perhaps survive.

I hit the “Answer” button and hold the phone to my ear. I don’t say anything, I just
listen, gauging the quality of the silence and waiting for him to speak.
After a moment, a deep, rough male voice says, “This must be Naz.”
I’m so shocked I almost drop the phone. The anonymous, untraceable burner phone. I
didn’t include my name in the text message, so how the hell does he know it’s me?
“Raphael?”
“Raphael’s dead. I stuck a knife in his chest and threw him overboard.”
His voice has an Irish accent, not French as I was expecting. Judging by that and
his words—which sound honest—this isn’t Raphael playing some kind of game.
“Who is this?”
“This is Killian.”
Killian? Who the fuck is Killian? All my senses have sharpened until it seems I
can hear the atoms vibrating in the air around me. Then it hits me.
This is probably the big motherfucker who put his hands on Eva.
Unless it’s one of the crew, but I don’t think so. Especially considering what he’d
said. Yacht crews don’t generally find it in their best interests to kill their employers and
throw them into the sea.
The words leave my throat in a gravelly scrape of pure hatred. “You have
something of mine.”
After a pause, he says disapprovingly, “I doubt Eva would be keen on hearing
you call her a ‘thing.’”
My eyes flare as wide as my nostrils do. The way he said her name is bad
enough, but the implication that he knows how she’d feel is like a sword of fire shoved
down my throat.
I demand, “What have you done with her?”

“She’s in good hands,” comes the calm response to my heated question. “You
don’t have to worry.”
Is he fucking kidding me?
Beside me, Connor is frowning and tense, but I can’t pay attention to him
because of all the murder and mayhem wreaking havoc in my nervous system. “What
do you want? What is this about? Where are you going with her? If she’s hurt, I swear
on my mother’s grave—”
“It’s beautiful, you know.”
His tone has changed. Now it’s soft, thoughtful, and I have no clue what he’s
talking about. “What? What’s beautiful?”
“The way she loves you.”
It feels as if King Kong just punched me in the chest. Eva told this man she loves
me? This man who grabbed her by the throat and dragged her across the deck of a
yacht? She hadn’t even told me herself.
My God, has he tortured her for information?
Before I can respond, he says, “I hope you deserve it. To be honest, you sound a
wee bit unstable. Are you sure you’re good enough for her? You might have to convince
me. After everything she’s been through, she deserves the best.” His voice drops. “And
Christ, she’s exquisite. Those eyes. That body. That fire. No wonder you and Dimitri are
so desperate to get her back.”
Breathing hard, my heart feeling as if it’s about to explode, I say, “Put her on the
phone.”
“She’s sleeping.”
I growl, “Listen to me, you son of a bitch—”
“Naz. What kind of a name is that? Is it short for something?”
Connor is motioning for me to give him the phone. I think he can sense things
have gone completely off the rails. I wave him away, frustrated and needing to hit
something.
“Yeah. It’s short for, ‘If you hurt her, I’m gonna kill you in every way there is to be
killed.’ It’s short for, ‘I will track you down to the ends of the earth and make you and
everyone you’ve ever met pay a thousand times over for any pain you cause the woman
I love.’ It’s short for, ‘I WILL NEVER STOP UNTIL I GET HER BACK.’”
There’s a pause, then what sounds like a satisfied grunt. “All right. You’re a little
too hotheaded, but you sound sincere. So I’ll answer your questions. What I want is
something Eva’s going to help me get. What this is about is the future of nations. Where
I’m going with her is . . . well, I can’t tell you that yet because if I do you’ll probably be
here before I can get what I want from Dimitri and then all my careful plans will be
ruined.”
I let loose a frustrated holler and Killian laughs.

“I get that a lot. Eva made almost the exact same noise a short while ago. She
didn’t like what I did to Raphael.” His voice turns wistful. “She’s sensitive that way, isn’t
she? Concerned for the well-being of other people. Even to the point of sacrificing
herself. Honestly, Naz, she’s remarkable. I’ve never met anyone like her. She’s . . .”
In his pause, I hear how loudly I’m breathing.
“Compelling, I think is the right word. Or maybe fascinating. Once you start
looking at her, it’s impossible to look away.” He chuckles. “But you know that already.
You sound obsessed.”
“Killian—”
“I’m going to destroy this phone after we’re done talking, because I’m sure you’re
tracking it. But I want you to know I was truthful when I told you she’s safe with me. And
I’ll try to get my business with Dimitri concluded as quickly as possible.”
He hesitates. When he speaks again there’s a new tone in his voice that raises all the
hair on my arms.
“Because the more time I spend with your woman, the less I want to give her back.

I am going to keep this relatively short as I don’t want to spoil anything.  This book has it all - suspense, humor, and steam.  Dangerous Desires picks up right where book 1 left off and I was immediately pulled in.  I absolutely adored Eva in that she is a hard core heroine. She is definitely a survivor and I admire how brave, determined, resilient, and intelligent she is.  Naz continues to be the hot and sexy alpha male who has quite the protective streak towards Eva and you cannot help, but love him.  This author beautifully incorporates both humor and suspense in this book. Some of the banter between Naz and Eva is hysterical and Naz’s rather inventive possible ways to cause Dmitri’s and a few others ‘ demise had me laughing.  This book has a fair amount of suspense and some twists and turns that kept me on my toes.  Overall, I thoroughly enjoyed this book as it moves at a good pace, has an intriguing storyline, and has likable, well-developed main characters. I’ve read a complimentary version of this manuscript. I am looking forward to seeing where the author takes us next with Eva and Naz.

Start the Series with Dangerous Beauty 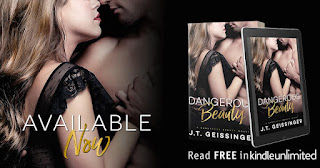 J.T. Geissinger is a bestselling author of emotionally charged romance and women’s fiction. Ranging from funny, feisty rom coms to intense, edgy suspense, her books have sold more than one million copies and been translated into several languages.

She is the recipient of the Prism Award for Best First Book, the Golden Quill Award for Best Paranormal/Urban Fantasy, and is a two-time finalist for the RITA® Award from the Romance Writers of America®. She has also been a finalist in the Booksellers’ Best, National Readers’ Choice, and Daphne du Maurier Awards.

Her first novel was published in 2012. Since then she’s written eighteen more novels. When she’s not writing, she’s reading, drinking wine, surfing the internet, and daydreaming about all the things she’s going to be when she grows up. She lives near the beach in Los Angeles with her husband and deaf/demented rescue kitty, Ginger.