New Release and Review: IF YOU DARE by Shantel Tessier

The game was over. The dares were getting old, and the secrets were piling up faster than the bodies.
But someone had other plans. They wanted to play a new game.
Becky Holt was the love of his life until he found out what she was hiding. Now he wants to seek his revenge in the most daring way.
Deke Biggs has always been a shark. He’s not afraid to kill, and he's about to become her worst nightmare.
But there’s a new player, and she plans on taking everything, no matter what the cost.
Try to beat him— If You Dare!
Who will win and who will lose?

Prologue:
Deke
Death Is A debt we are all born owing.
It is something that money can't buy nor can it be traded.
You can't bargain for more time. When it's up you accept it like a fucking man.
I've never been afraid to die. Or to love, for that matter.
Aren't they the same?
You surrender to a fate you have no control over.
You don't get to choose when or how you die, just as you can't choose when and who you fall in love with.
Some couples get a happily ever after while others are toxic for one another.
My love was like that.
She lied; I believed every word.
I hurt her; she forgave too easily.
It was a vicious circle of deceit and sex wrapped up in a pretty black bow. Neither one of us could quit.
I wrapped my hand around her throat, and she begged me to breathe.
She stabbed me in the heart and demanded I bleed.
She might as well have been fucking poison, but I would have drunk her anyway.
That was the kind of obsession I had for her.
I knew how it would end-total devastation.
A war zone of Broken bones and bleeding souls.
I should have hated her, but that's the funny thing about love-it’s out of your control.
Even when it leaves you with two black eyes, you beg for more.
People are afraid of the unknown, but I've never feared death, and love was no different.
She was going to destroy me, and I was going to let her.  It was a game that could only end one way-a slow and torturous death.

What an amazing read and excuse me while I go pick my chin up off the ground.  I knew based off this author’s previous works that it would be dark and a bit twisted, but she has outdone herself with If You Dare.  I am going to keep this pretty vague as I don’t want to give even one smidgen away. Just know that you need to read this book! The mind games alone will leave your head spinning.  There are secrets, lies, and betrayals at play. There is a fair amount of action, clever manipulation, and twists and turns.  Just when I would think that I had it all figured out BAM! another shocking revelation! Deke is the ultimate anti-hero.  He is sexy, intense, and occasionally prone to violence, but he is also loving and unfailingly loyal. It was also great to see Austin and Cole as well as the other GWS.  If You Dare can, in theory, be read as a standalone - you would not be lost at all.  However, I do recommend reading the previous 2 books in the Dare series because they are a must read if you like dark romances, but also because If You Dare contains spoilers for the previous 2 books.  This book moved at a fast pace and definitely kept me on my toes and entertained until the very end. NOW AVAILABLE & FREE IN KU!
I Dare You (Dare Series #1)
Amazon US- https://amzn.to/2IJRYYz 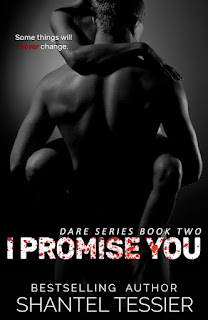 Shantel is a Texas born girl who now lives in Tulsa, Oklahoma with her high school sweetheart, who is a wonderful, supportive husband and their two daughters. She loves to spend time cuddled up on the couch with a good book.
She considers herself extremely lucky to do what she does while getting to work from home. Going to concerts and the movies are just a few of her favorite things to do. She hates coffee but loves wine. She and her husband are both huge football fans, college and NFL. And she has to feed her high heel addiction by shopping for shoes weekly.
Although she has a passion to write, her family is most important to her. She loves spending evenings at home with her husband and daughter, along with their cat and dog.