BETWEEN CLOUDS AND STARS by Sharlyn G. Branson

on September 11, 2019
From the Bestselling author of the Limits of Destiny series, comes a sexy new standalone novel by Sharlyn G. Branson. 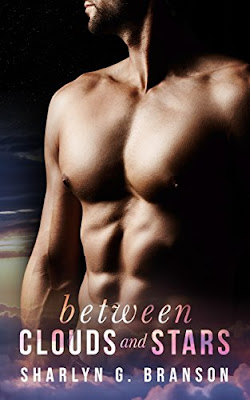 My life is perfect. I have money, power, good looks and countless women ready to do anything to get their hands on me, and my rather large package. My business brings in billions every year and my airline has the fastest airplanes in the world. In short, I have everything a man can dream of. Or so I thought until I met Estelle Klide.The second I saw her, I decided to make her mine.Her body was sinfully sexy. She had amazing, mesmerizing indigo eyes. Her sweet scent was the epitome of temptation and evoked images of wild, animalistic sex in my mind.I couldn’t help but fall for her – hard. Letting her slip through my fingers was not an option.In involving myself with her, I entered waters I’d never thought I’d have to swim in. I set off on a journey filled with mystery, fear and a lot of love.The only thing that threatened to ruin this paradise and destroy everything, was her ex-husband, who turned out to be a real monster.BETWEEN CLOUDS AND STARS is a standalone romance novel, which takes place in the fantastical world of the future.

Holy Batman!  I think that my kindle melted from the shear hotness within the pages of this book.  Between Clouds and Stars has it all - an office romance, intense chemistry between characters, and a fair amount of action.  I am not usually one for futuristic-type novels, but this one was well done.  Taking place in 2048, it featured some futuristic elements, but it was not over the top.

Told from a dual POV, I enjoyed getting a peak into the minds of both Estelle and Nick. Estelle is a strong heroine.  She had a rough childhood and endured a rather volatile marriage, but she is a survivor.  I love how resilient she is.  One would expect her to be jaded on the matters of love, but Nick breaks down those walls and she wonders if she can share her secrets with him.  Nick is my favorite type of billionaire - a deliciously hot alpha who oozes confidence, but also has a huge heart for his family and Estelle.  It starts off as insta-lust for him, but his feelings evolve into something more.  To say that these two have a strong attraction towards each other is an understatement.  Sparks fly between these two.  This is not just a romance book as it contained a certain level of action and suspense thrown into the mix, which I thought really added to the plot.  My only complaint was that there were a few explanations for events that I thought were missing.

Overall, I really enjoyed this book with it’s entertaining storyline, likable characters, and moments of suspense.  I received and complimentary version of this book.

Sharlyn G. Branson is a Bestselling author of contemporary and new adult romance—BEAUTIFUL DEVIL DUET,BETWEEN CLOUDS AND STARS and THE LIMITS OF DESTINY SERIES (ranked #1 on Amazon USA, UK, Australia and Canada). She is known for her sexy romance style that's full of mystery and emotions.

Sharlyn is happily married and mother of a lovely boy. She is addicted to coffee and love to travel around the world with her family.