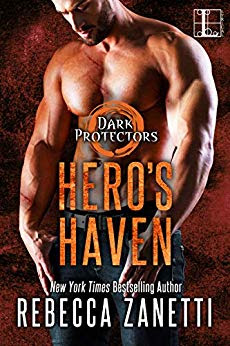 He’s her darkest fantasy. . . After years of struggling, Haven Daly has finally accepted that she’s nuttier than a fruitcake. Why else would she see visions of a beautiful but tormented male every night . . . and actually believe she can talk to him, even feel his touch?  But thanks to those dream journeys, she can paint images nobody else on earth can duplicate. In each brush stroke, she captures the blatant masculinity and raw desire in his eyes that promise he’s coming for her…and soon.   She’s the light that keeps him going. . . Quade Kayrs has already suffered a lifetime of pain and torture. Completely isolated, he kept his sanity  thanks to one beautiful female, a vision with kind emerald eyes. In the end, her soft voice led him out of hell. Now, naked and alone, he’s in a strange world that bears little resemblance to the one he left behind. All he knows is Haven.  All he wants is Haven.  His final mission? To protect her from the evil hunting them both—whether she likes it or not . . .

Hero’s Haven is another fast-paced, breathtaking installment in this author’s Dark Protector series. This paranormal romance is a wild ride full of action and suspense and I absolutely loved both Haven and Quade.  The world that this author has created with her unique take on all of the paranormal creatures - the Kurjans, demons, vampires, and fae - is phenomenal and I like how she crafts each book with a focus on one particular couple all while keeping up with the interconnecting storylines.

In the previous books, we learn that Quade has spent thousands of years in another world to protect the realm from Ulric.  The horrors that this demon-vampire hybrid has endured is shocking.  Haven is a very talented artist who paints her visions and has visited Quade in her dreams. When Quade’s world implodes and he is forced back on Earth, the poor girl believes she’s hallucinating when she finally meets him face-to-face!

Quade’s character is rather endearing.  He is the usual demanding, protective male that we all know and love from this author’s works, but he is also hilarious when it comes to all of his idiosyncrasies as he acclimates to being a part of the modern world.  I liked Haven as a heroine as she is wildly independent, a survivor of a crazy past, and refuses to put up with Quade’s overbearing nonsense.  Their connection is palpable, but being together isn't easy as there are many forces throwing obstacles in their way.

I feel like in this book, compared to the previous one, that the underlying story progressed more.  We see more of the cyst and  the Seven, view a bit more from Hope’s POV, and discover more about the other dimensions/dream worlds.  It was fun to get reacquainted with some the members of the Realm and the Seven from the previous books.   I suppose, in theory, that Hero’s Haven could be read as a standalone as it is the story of Quade and Haven, but given the interconnecting characters and the overall underlying series plot, I do recommend starting with this series earlier books.

I read a complimentary copy of this book from Netgalley.