Welcome to their kingdom

Cole Covington is the most popular heartbreaker at school.
Every guy wants to be him and every girl wants to screw him.
Except me.
His devastatingly good looks, golden arm, and flirty smiles don't do it for me anymore...because I know what's lurking underneath the star quarterback's gorgeous armor.
At least I thought I did.
Sometimes the most beautiful people...hide the ugliest truths.
And sometimes the only way to save someone...
is to walk beside them through hell.
Sawyer Church is the bible-thumping nerd of Royal Hearts Academy.
Girls pick on her and guys don't notice her.

Except me.
Sweet, curvy, and sarcastic, she's impossible to ignore.
No matter how much I try.
Everyone at school has her pegged as the chubby, Jesus loving geek, but unlike them—Sawyer's real and never pretends to be someone she's not.
Until I ask her to be my fake girlfriend.
Sometimes the most beautiful souls...hide the greatest pain.
And sometimes the only way to save someone...
is to fight for them.

Make sure to vote for RUTHLESS KNIGHT for January’s Most Anticipated Reads:  http://bit.ly/2pmJujU

This emotionally charged, highly entertaining book slayed me with this it’s engaging storyline and beautifully flawed, honest characters. I fear my review will not do this book justice.  This author has such a phenomenal writing style that I was grabbed right from the first page and was fully immersed in the story and invested in these characters until the very end.

Seemingly to be complete opposites, Cole and Sawyer are exactly what each other needs.  I found both of these characters to be perfectly imperfect - the type of relatable characters that have their flaws, but also possess an underlying strength.

Cole is a broken boy with a tortured soul and while he may be the  popular golden boy at his high school, the author peels back the many layers of this character revealing that there is so much more to him.  There were moments when I wanted to shake him and chuck my kindle and moments when I wanted to give him a big hug. I loved Sawyer and I believe that many will relate to her character. This girl is full of spunk and has a huge heart, but she also has her own demons to battle. These two will definitely pull at your heartstrings and the chemistry between the two of them is undeniable.

While this book is long, it went by fast.  I tried to pace myself, but I just couldn’t put it down! Ruthless Knight is a beautifully written book that incorporates some important hot topics and is sure to put you through all the feels. It is a standalone novel in this author’s Royal Hearts Academy series, however I recommend reading Cruel Prince first as you’ll get a bit more backstory and also because Cruel Prince is amazing!  I read an early complimentary version of this book. 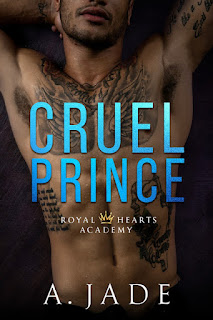 Royal Hearts Academy is a series of standalones, but you can catch up with the first book, Cruel Prince
Amazon: https://amzn.to/30l209E

Ashley Jade loves to tackle different genres and tropes within romance. Her first loves are New Adult Romance and Romantic Suspense, but she also writes everything in between including:  contemporary romance, erotica, and dark romance.
Her characters are flawed and complex, and chances are you will hate them before you fall head over heels in love with them.
She’s a die-hard lover of oxford commas, em dashes, music, coffee, and anything thought provoking…except for math.
Books make her heart beat faster and writing makes her soul come alive. She’s always read books growing up and scribbled stories in her journal, and after having a strange dream one night; she decided to just go for it and publish her first series.
It was the best decision she ever made.
If she’s not paying off student loan debt, working, or writing a novel—you can usually find her listening to music, hanging out with her readers online, and pondering the meaning of life.
Check out her amazon page and Facebook page for future novels.
She recently became hip and joined Twitter, so you can find her there, too.
She loves connecting with her readers—they make her world go round’.
Connect w/Ashley:
Website: https://ashleyjadeauthor.com/
Facebook: https://www.facebook.com/Ashley-Jade-Author-788137781302982/
Twitter: https://twitter.com/ajadeauthor
Instagram: https://www.instagram.com/ashleyjadeauthor/
Goodreads: https://www.goodreads.com/author/show/14175946 Bookbub:https://www.bookbub.com/authors/ashley-jade
Amazon: https://amzn.to/2RGsIJ9