Review: AFTER HIS BANANA by Penelope Bloom 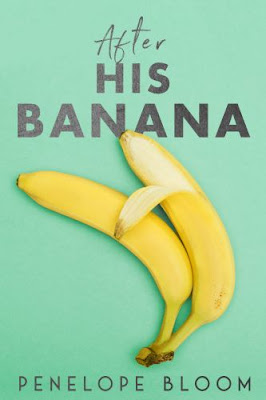 What comes after His Banana?
Technically, that would be me.
Before you label me as a potassium sucking harlot,
Let me explain a few key points…

I didn’t have time for relationships, especially not with someone like Miles Chamberson. But considering my circumstances, I didn’t really have a choice.

Yes, he was the kind of offspring only generations of exceptionally attractive people could create. Practically dripping with so much perfection you could choke on it.

Then again, I was almost certain he was certifiably insane.

Within a few minutes of meeting him, he was already posing as a nude model for my clay sculpture class in a failed attempt to expose himself to me.

So when he handed me a banana, it was almost normal by comparison.

And after his banana found its way into my mouth, well… I wish I could say that was where the saga of Miles Chamberson and I ended.

I prefer to start every potential relationship with an oddly phallic, edible object.

Watch any woman with a suggestive object and prepare to unlock the secrets of the female psyche. Does she favor it with a secretive little smile? Nymphomaniac. Does she flinch back, only to guiltily grab it a moment later? Cautious, but wild once she opens up. Does she throw it back at your head and score a direct hit, concussing you for two weeks? Softball player.

Or, does she pick it up and devour it, inch by inch? Does she slide that bad boy into the hatch and relish every moment of it? If she does, you have yourself a keeper.

The recipient of my latest banana was the latter, but there was one glaring problem.

Commitment and I had a troubled past. To be more accurate, I’d taken commitment out back and shot it until I ran out of bullets years ago.

But my old man, Bruce Chamberson, says there’s only one way I’ll earn my rightful spot in the family business. I’ve got to show him I can stick with something “for once”.

Lucky for me, I’ve got just the girl in mind to prove I can do it.

After His Banana is a light-hearted and fun romantic comedy that is sure to leave you laughing out loud as you follow the romantic and somewhat crazy journey between the delightful Rey and zany Miles.  If you have read any of this author’s Objects of Attraction books, especially His Banana or Her Cherry, then you will have a general idea of what to expect - hilarious verbal sparring, quirky characters, and lots of crazy antics.

After His Banana is a standalone romantic comedy that is a bit over the top with the numerous escapades that Miles and Rey get into.  Miles is the progeny of Bruce and Natasha (from His Banana) and is a rather amusing and insanely good-looking character.  Rey is a psychology student at NYU and her first encounter with Miles is quite entertaining.  She is more responsible and sensible than Miles, but also possesses some sass.  My only complaint is that Miles, while older than Rey, was very immature and childish at times. However, that did not detract away from my enjoyment of the book.

I would be remiss if I didn’t mention the amazing cast of secondary characters.  Grammy is absolutely batty and all of the scenes with her had me nearly peeing my pants with laughter.  The banter between Miles and Rey also left me chuckling.  After His Banana is a book not be taken seriously or even realistically.  It is meant to elicit tears of laughter from its unique, quirky characters who engage in over the top antics all while leaving you with a smile on your face.  This romantic comedy is the perfect book for a weekend read or to life your spirits.  I read an early complimentary version of this book via Booksprout.

I'm so proud and extremely thankful to my readers for making me a USA Today Bestselling author and Amazon top 10 best selling author!
I love writing romances that I'd want to live in. I like my men with a mind as dirty as sin, a bit of an attitude, and a heart of gold they try to keep hidden away. I absolutely love writing about BDSM, but it's not featured in all of my stories. Check the bottom of my bio for a super quick breakdown of my books and which one might suit your style.
I stepped away from my job as a high school teacher to pursue my dream of writing in October of last year. Writing had always been my dream, but it took having my two beautiful daughters to push me to follow through with it. I wanted to be able to show my girls that nothing is impossible. No dream is too big. No matter what anyone tells them.
They just have to look at their mommy to see it. Being a positive example for my girls is worth all the late nights, doubts, and fears that come with being a writer. I wouldn't trade it for the world. Whew! Look at me getting emotional over here. It's just an author bio, Penelope!