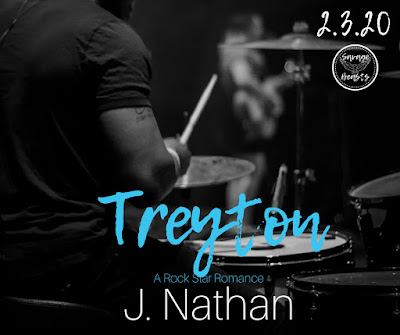 Treyton Collins is Savage Beast’s drummer.
He’s the rock band’s resident bad boy
with the troubled past, tattoos, and tongue ring to prove it.
No woman has yet to be immune to Treyton’s charm.
That’s why he’s fascinated by the one who is...
She couldn’t be any more different than him.
She’s business suits and he’s torn jeans.
She’s bossy and he’s fun-loving.
She’s got an attitude and he can’t stand it.

Brielle Patrick is Savage Beasts’ publicist.
Her latest publicity stunt left her on the outs with the band.
But, if nothing else, Brielle is persistent.
And she’ll prove it by spending the summer on tour with the band.
She’s convinced herself she’s there to keep Treyton out of trouble.
But that isn’t the only reason she’s overseas for two months.
She’s searching for something her life is missing.
Something she might find when she least expects it.
With the guy she least expects to find it with.

Once the last two fans left, the guys walked toward the door, eager to get ready to take the stage.
“Treyton,” I called with conviction in my tone.
The guys all mumbled as they walked out of the room with Trey trailing behind them.
Son of a bitch.
I dragged in a deep breath, then stormed out of the room, stalking backstage where everyone grabbed food or drinks. I walked right up to Trey whose back was to me and stepped in front of him. “You heard me.”
His brows squished together.
“You’re acting like a child. Act like a man.”
He grabbed my arm roughly and pulled me out of the room and into a hallway, slamming the door behind us. He walked into me so I needed to step back, right into the wall. He caged me in, his hands pressing to the wall above my head. And just like he had the other night on his bus, he slanted his head so our faces were close. “Fuck me?” he asked, questioning my words.
I swallowed hard. Having him that close was daunting, even if I was pissed at him. I remained focused and angry. Because I was. How dare he ignore me?
He shifted his hips, his erection pressing into my stomach. “Does a child feel like this?”
Though the intrusion sent zingers through me, I couldn’t let that distract me. “Stop.”
“Stop what?”
“Stop using your body to try to make me lose focus.”
He smirked, an evil glint in his eyes. “Is that what I do to you?”
“No, you piss me off.”

Rockstar romances are some of my favorite reads and as this field is saturated, it can be difficult to find a book that doesn’t fit into a cookie cutter formula.  Treyton is a breath of fresh air with its engaging storyline, captivating characters, and a beautiful style of writing that is sure draw you in right from the beginning.  This is book that you will want to devour in one sitting and will leave you with a smile on your face as you follow Treyton and Brielle’s somewhat rocky journey towards HEA.

He is a tattooed and pierced, fun-loving rocker and she is a hardworking, trendy suit publicist.  Could the two be any different?

Treyton, the drummer of Savage Beasts, is the playboy “screw up” of the band and Brielle, as the band’s publicist, cleans up his messes.  I found Treyton’s character to be endearing as he is self-assured, but has a hidden depth to him that not many see given his childhood history.  As for Brielle, I wasn’t sure if I was going to like her based off of how her character behaved in Kozart, but she won me over.  She comes across as confident and stuck up, but she also has an underlying vulnerability about her. These two are seemingly opposites and yet, they are perhaps more alike than different. There is a push pull between them and they are frequently at odds with each other, but they are also so good together. It was entertaining to see how their relationship evolved from tenuous frenemies to lovers.

This book has the perfect combination of drama, romance, steam, and rock ’n’ roll.  The story flows well and it will seem like a quick read because it is impossible to not fall in love with these characters.  Treyton is book 2 in this author’s Savage Beasts series and it can be read as a standalone - you will not be lost.  However, I do recommend reading Kozart as it is also a phenomenal read and because there is a bit of character overlap. I thoroughly enjoyed this rockstar romance and I am looking forward to more of this author’s books.  I received an early complimentary version of this book.