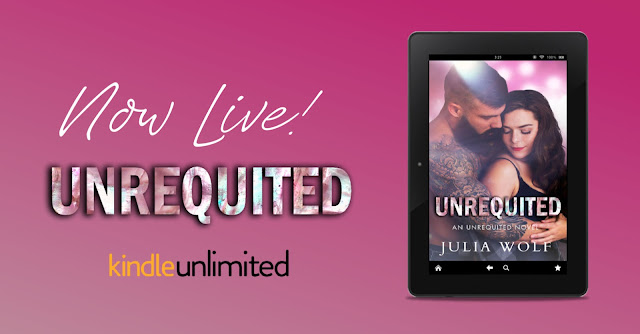 Unrequited by Julia Wolf is LIVE!! Don’t miss this sexy rock star romance about a curvy, badass drummer and the bassist she loves to hate. 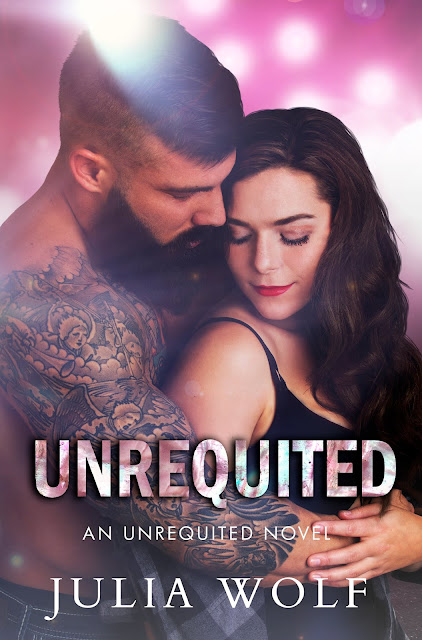 My proper southern belle mama might disagree, but I say I was born to be a rebel. From the second I got my hands on a pair of drumsticks, my future was sealed. I never fit in anyway, not with my rocker soul and curves that never take a day off.
But what’s a drummer without a band? Oh, that’s right. A cocktail waitress.
That is, until the chance of a lifetime falls into my lap—Unrequited needs a drummer, and I happen to have an ‘in’ with the band.
The only trouble is, Santiago Garza, Unrequited’s broody, scowly bassist, doesn’t want me in his band, which is kind of funny, considering he was the one who took my heart and stomped all over it five years ago.
My career is far more important than hurt feelings though, so Santiago can suck it up and deal. That’s what I’m doing, no matter how many times I remember the feel of his lips on mine. I won’t fall for him this time. I’m done being anyone’s second choice.
📚Add to Goodreads: https://www.goodreads.com/book/show/49516207-unrequited 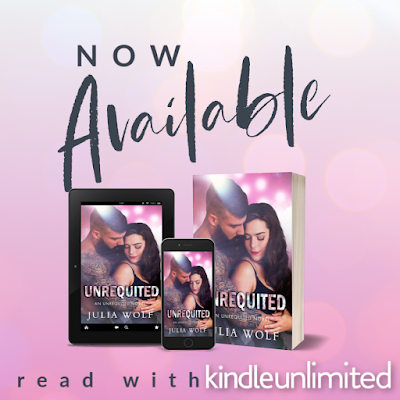 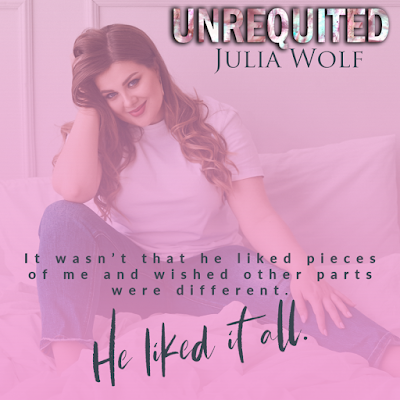 No one writes a rockstar romance quite like Julia Wolf and you will definitely not be disappointed with Unrequited!  If you have previously read books by this author, then you may be familiar with the rock band Unrequited.  If this is your first rocker romance by her, then you are in for a treat!  Wonderfully written, Unrequited is crafted in such a way that you cannot help but be fully immersed in the characters’ journey and fall in love with Maeve and Santiago. One thing that I absolutely adore about this author’s writing is that all of her characters are undeniably unique with strong, likable personalities and they are perfectly flawed in such away that they are relatable. I can honestly say that this goes for both Maeve and Santiago as well as the supporting characters.

If I had to sum up my review in two words, it would be - female drummer - because how awesome is it to have the leading lady rock out on such a heart-pounding instrument often dominated by men in the hard rock world!? But, do not be mistaken here, Maeve is not a drummer girl. She is a drummer and an excellent one who finds herself on tour with Unrequited. . . with a man who shredded her heart 5 years prior.  Maeve is a strong heroine who doesn’t fit into society’s standards of the perfect Southern Belle flitting about in size 0 clothing.  She is a voluptuous woman who can ooze Souther charm all while rocking out.  She is vibrant and talented, but she is also insecure in some areas of her life.  She is a girl that I could really identify with and a girl that I would love to have in my corner.

Santiago is the older bass player for Unrequited and was hesitant to have Maeve join the band on the road due to various reasons. It took me a little longer to warm up to him, but Santi won me over with being a little rough around the edges all while possessing a big, protective heart.  These two have a bitter past between them and it was entertaining to see how their relationship evolved.  I did find the book to be a bit slow in the beginning, but once it picked up, it really picked up!  I enjoyed the palpable heat between Santiago and Maeve and my kindle may have spontaneously combusted a few times due to the scorching scenes.

I also really liked how the author scattered brief flashbacks throughout the book to illustrate how the band originally formed and how things went down with Maeve and Santiago years prior.   Unrequited is a well written read that is more along the lines of the Blue is the Color series and not quite as emotionally gut wrenching as the Never Blue Duet. As with this author’s other books, there is a delightfully entertaining cast of secondary characters.  I adored the other members of Unrequited as well as Maeve’s friends.  Overall, I really enjoyed this rockstar romance complete with it’s likable characters and engaging storyline.  I am counting down the days until this author’s next release.

GIVEAWAY
To celebrate the release of Unrequited, Julia Wolf is giving away a signed paperback. Head to her Facebook page to enter:
Facebook: https://www.facebook.com/AuthorJuliaWolf/ 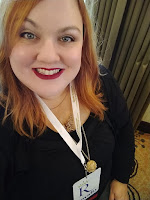 Julia Wolf is a lover of all things romance. From steamy, to sweet, to funny, to so dirty you’ll be blushing for days, she loves it all.
Formerly a hair stylist, she spent years collecting stories her clients couldn’t wait to spill. And now that she’s writing full time, she’s putting those stories to use, although all identifying characteristics have been changed to protect the not-so-innocent!
Julia lives in Maryland with her three crazy, beautiful kids and her patient husband who she’s slowly converting to a romance reader, one book at a time.