BURY ME WITH LIES, the highly-anticipated conclusion to the  Twin Lies Duet by S.M. Soto is available now!

Stuck between life and death, Mackenzie is hell-bent on proving her innocence, and getting revenge on the men who murdered her sister. With one series of unfortunate events after another, Mackenzie must outrun her own fate—death.

When secrets unravel and lies become twisted betrayals, Mackenzie finds herself in more danger than she could’ve realized. Her only saving grace is Baz, the elusive playboy she’s given her heart to. But will placing her trust in a man like Baz be her downfall? 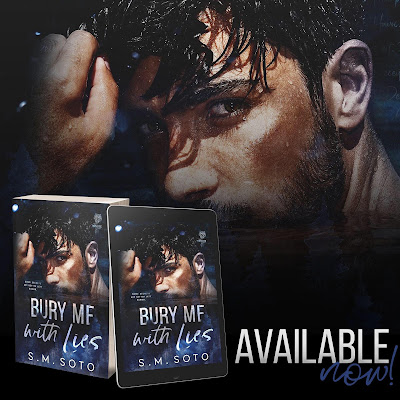 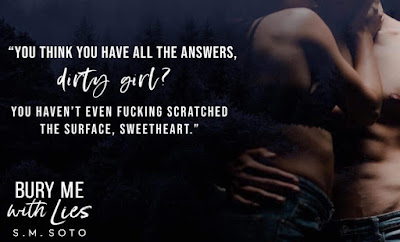 Bury Me With Lies is the thrilling conclusion to the Twins Lies duet and is the type of book that you will not want to put down due to its mystery, intriguing characters, and kindle melting moments!  This romantic suspense is guaranteed to pull you into an intricate web of lies, secrets, and betrayals all while making you question just what really happened all those years ago and who can one really trust?

This engaging novel picks up right after the epic cliffhanger at the end of the previous book and you will find your heart racing and yourself second guessing everyone and everything.  MacKenzie continues to struggle with all of the lies and deceit when it comes to Baz and the other Savages and I could not help but admire her strength and dedication as she attempts to unravel the truth.  However, there were moments where I really wanted to shake her for some poor decisions and recklessness. Oozing raw sex appeal and power, Baz is positively sinful, alluring, and in possession of a filthy mouth.  He pretty much embodies all of  the characteristics that I love in an alpha hero.  He finds himself immersed in a series of lies and betrayals, thus paving the way for mistrust as well.

I found Bury Me With Lies to be an entertaining, spellbinding read that had a good intricate plot and flowed well. Yet, I found the middle of the book to be too long.  There was a lot of back and forth between Mackenzie and Baz and I felt that while it moved at a good and steady pace, some sections could have been removed without detracting away from the story.  The last 25% was phenomenal due to some spectacular, albeit slightly predictable twists.  I really enjoyed the underlying mystery, the action, and the suspense that surrounded the characters.  Baz’s and MacKenzie’s journey is an interesting one and I loved the chemistry between them. The plot was well thought out, the characters were well developed, and I like how the author left the reader guessing throughout the entire duet.

I read an early, complimentary version of this book.

Start the duet with Kiss Me With Lies!

S.M. Soto was born and raised in Northern, California where she currently resides with her son. Her love for reading began when she was a young girl, and has only continued to grow into adulthood. S.M. lives for reading books in the romance genre and writing novels with relatable characters. She refers to herself as a bit of a romance junkie. S.M. loves to connect with readers and eat copious of donuts that will surely lead to her demise.