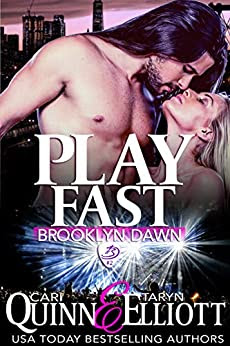 Five reasons I should never go near Oz Taylor:

• He’s a hot as sin world famous rockstar with a big...ax.


• He’s a huge, tattooed older guy with a piercing dark gaze that can destroy a woman’s virginity.
• He’s my forever best friend’s older brother.
• He hasn’t spoken to me in more than five years.
• Oh, and I’m pretty sure he hates me...
Author’s note: Play Fast is a standalone enemies to lovers rock star romance. The Brooklyn Dawn series has a suspense arc that goes through the entire series. It will be resolved in the final book. Play Fast ends in a happily ever after with no cliffhanger for the main couple.

These two authors never fail to come together and write a phenomenal rock star romance that elicits all the feels all while stirring up lots of steam and adding a touch of suspense.  Play Fast is an emotional enemies to lovers romance that will leave you crying, laughing, and swooning.

Oz is the scrumptious bass player from Brooklyn Dawn and Daisy is the brand’s hair and makeup artist.  The two share a rocky past where a heartbreaking tragedy tore them apart leaving Oz with wanting nothing to do with Daisy. What follows is a story full of heartbreak and love, healing and hope as well as a good dose of humor and intense chemistry that will leave you cheering for Oz and Daisy.

I am staking my claim on Oz as my book boyfriend! I was completely charmed by this beautifully broken rockstar.  As for Daisy, I absolutely adored her for her vibrant and spirited personality.  The authors did a masterful job with character development as well the evolution of these two’s relationship.  As with these authors’ previous works, the secondary characters play huge roles and I loved getting caught up with all of them.  The band truly is a family.  Play Fast can be read as a standalone, but I do recommend reading their other books for the ultimate experience.  There is no cliffhanger, but it should be noted that the underlying suspense is threaded throughout the series.  If you are looking for an entertaining, enemies to lovers rockstar romance, then you will definitely want to read this book!

I read an early complimentary version of Play Fast.

About Cari Quinn:
USA Today bestselling author Cari Quinn (who is also half of bestselling author Taryn Quinn) grew up wanting to be a singer more than anything else. When she realized she probably wouldn’t be hired as the opening act for the Foo Fighters, she stopped singing and started writing. Now she happily writes about rock stars, MMA fighters, suited heroes, bodyguards and everything in between. And she blasts her music as loud as the neighbors can stand, because hey, she’ll always be a rock star in her own head.

About Taryn Elliott:
I'm USA Today Bestselling author Taryn Elliott. I'm a music freak who loves everything about telling stories. I have way too many ideas rattling around in my head, but music almost always ends up in the story somehow. I'm very lucky to have a job that allows me to slip into the shoes of musicians, actors, business women, tycoons, bodyguards, chefs, bakers, carpenters, inventors, bartenders, wine makers, artists, and so many more characters to come. Talk about living the dream.
Oh, and I write 85% of this with my bestie and writing partner, Cari Quinn. We also write super sexy paranormal romance and erotic romance under Taryn Quinn.
Enough about me...go read about one of my hot guys. They're far more interesting. ;)