THE HOUSE OF LONG AGO by Steve Berry and MJ Rose

The time has come for Cassiopeia Vitt to sell her ancestral home. It sits on a Spanish bluff by the Mediterranean Sea, and bears the name Casa de Hace Mucho Tiempo, House of Long Ago. Trapped inside its walls are memories from a time when Cassiopeia was growing from a rebellious adolescent into a thoughtful young woman—regretful times when she often found herself estranged from her parents. Also inside are fifteen paintings, each one a masterpiece, together representing an investment in the tens of millions of euros—her father’s private art collection—which she intends to donate to museums. But when an art expert declares all fifteen paintings fake, and suggests that her father may have been involved with something illegal, she embarks on a quest to find answers.

From a secret repository in Andorra, to a mysterious yacht in the Mediterranean, then finally onto the streets of Paris and a horrific reminder from World War II, Cassiopeia must battle every step of the way to stay alive—a fight that will finally bring her face to face with the truth about the House of Long Ago. 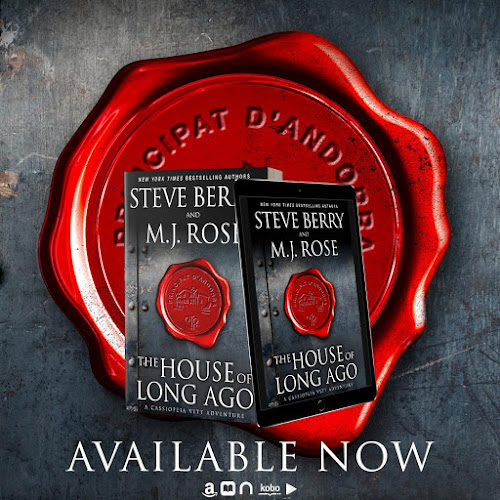 My father, Arturo Pedro Cristóbal Vitt, had been a businessman with an historian’s knowledge, an artist’s soul, and a religious man’s ethics. He regarded antiquities, artwork, and architecture with a deep reverence. No wonder he’d fallen in love with the ancient stone structure perched on an outcropping of Spanish rock known as Tossa de Mar, high above the Mediterranean Sea. When he bought the house, it was not inhabitable. Once it had been a monastery, founded in the 11th century by Benedictines, rebuilt several times during the ensuing centuries. During the Spanish Civil War it became a refuge for those being targeted by anarchists and communists. While the Republicans and the fascists, headed by Generalissimo Francisco Franco, fought each other, priests were rounded up and executed daily. The Benedictine monks, who by then had returned to the site, took in those at risk and hid them. The war lasted almost a year and more than a million died, but hundreds of innocents were saved by the monks of Tossa de Mar. As a child I became obsessed with the heroics of those robed holy men, many of whom were buried in the cemetery on our lush grounds. We owned forty acres of ruins, forest, olive groves, and a steep rocky staircase that led down to a secluded cove. A fifteen-minute drive led to the 14th century walled city of Tossa de Mar with its seven watchtowers, and a forty-minute ride brought you to Barcelona. The monks’ main claim to fame for over three centuries had been olive oil. Presses, bottles, baskets, and other paraphernalia needed in its manufacture had been found on the grounds during my father’s four-year-long renovation. Most of the larger stone items were salvaged, some used as sculptural elements in my mother’s garden, others as decorations throughout the grounds. My parents died a long time ago and, for the past couple of years, I had been deliberating on the idea of selling the property. I rarely ventured there much anymore. I lived in France, so the villa had sat idle for a long time. And it wasn’t just that I didn’t want to let it go that kept me from calling in the realtors, it was that so many memories would be stirred. Some wonderful, of course. Most, in fact. But some were sad, others brutal and frightening. No one amassed a fortune the size of my father’s without making enemies. I recall how more than once someone had tried to destroy him. How they even used my mother and me on occasion in their efforts. But after reading about the robbery in Provence, I knew that even if I wasn’t ready to sell the house, it was time to divest it of its most valuable possession—my father’s Galería de Belleza, his Gallery of Beauty—a collection of fifteen special paintings that he’d treasured, each a masterpiece, each carefully chosen and lovingly conserved. By both him in life. And me, after his death.

Steve Berry is the New York Times and #1 internationally bestselling author of nineteen novels, which include: The Warsaw Protocol, The Malta Exchange, The Bishop’s Pawn, The Lost Order, The 14th Colony, The Patriot Threat, The Lincoln Myth, The King’s Deception, The Columbus Affair, The Jefferson Key, The Emperor’s Tomb, The Paris Vendetta, The Charlemagne Pursuit, The Venetian Betrayal, The Alexandria Link, The Templar Legacy, The Third Secret, The Romanov Prophecy, and The Amber Room. His books have been translated into 40 languages with 25,000,000 copies in 51 countries. They consistently appear in the top echelon of The New York Times, USA Today, and Indie bestseller lists.

History lies at the heart of every Steve Berry novel. It’s his passion, one he shares with his wife, Elizabeth, which led them to create History Matters, a foundation dedicated to historic preservation. Since 2009 Steve and Elizabeth have crossed the country to save endangered historic treasures, raising money via lectures, receptions, galas, luncheons, dinners and their popular writers’ workshops. To date, 3,500 students have attended those workshops with over $1.5 million dollars raised.

Steve’s devotion to historic preservation was recognized by the American Library Association, which named Steve its spokesperson for National Preservation Week. Among his other honors are the Royden B. Davis Distinguished Author Award; the Barnes & Noble Writers for Writers Award given by Poets & Writers; the Anne Frank Human Writes Award; and the Silver Bullet, bestowed by International Thriller Writers for his philanthropic work. He has been chosen both the Florida and Georgia Writer of the Year. He’s also an emeritus member of the Smithsonian Libraries Advisory Board. In 2010, a NPR survey named The Templar Legacy one of the top 100 thrillers ever written.

Steve was born and raised in Georgia, graduating from the Walter F. George School of Law at Mercer University. He was a trial lawyer for 30 years and held elective office for 14 of those years. He is a founding member of International Thriller Writers—a group of nearly 6,000 thriller writers from around the world—and served three years as its co-president.

M.J. Rose grew up in New York City mostly in the labyrinthine galleries of the Metropolitan Museum, the dark tunnels and lush gardens of Central Park and reading her mother's favorite books before she was allowed. She believes mystery and magic are all around us but we are too often too busy to notice... Books that exaggerate mystery and magic draw attention to it and remind us to look for it and revel in it.

Rose is a the Co-President and founding member of International Thriller Writers and the founder of the first marketing company for authors: AuthorBuzz. She runs the blog, Museum of Mysteries.

She has appeared on The Today Show, Fox News, The Jim Lehrer NewsHour, and features on her have appeared in dozens of magazines and newspapers in the U.S. and abroad, including USAToday, Stern, L'Official, Poets and Writers, and Publishers Weekly.

Rose graduated from Syracuse University and spent the '80s in advertising. She was the Creative Director of Rosenfeld Sirowitz and Lawson and she has a commercial in the Museum of Modern Art in NYC.