Review: BREAKAWAY by Lizzie A. Williamson 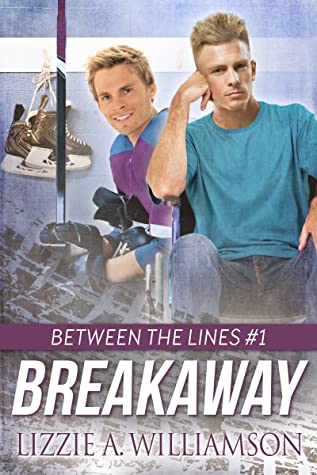 When your world is unraveling at the seams -- can love find a way to conquer all?Jesse Mitchell was a professional motorcycle (MotoGP) rider until an on-track accident nearly took his life. He moves to Uppsala, Sweden, to rehab, but his frustration over his predicament threatens to consume him. As time creeps forward, Jesse realizes mistakes of the past can’t ever be fully erased.When his neighbor Hugo Magnusson, captain and star defenseman for the HC Uppsala Dragons, comes to Jesse’s aid after a fall, the gentle giant offers to take him in to assist with his rehab. Despite Hugo's care and attention, Jesse spirals deeper, firmly barricading his anguish -- and his heart -- behind steel walls.But when a figure from Jesse's past starts causing trouble again, how much further can Jesse fall? Be afraid of the Breakaway -- only the strongest survive.

Be prepared that while this is a relatively quick read, a lot happens within these pages and you will find yourself going through a roller coaster of emotions.  Jesse starts off as a bit of a broken hero.  He is struggling both mentally and physically in the aftermath of a motorcycle accident that ended his career.  He is resilient and the path of healing is not an easy one. The author does a spectacular job with his character growth throughout the novel.  Hockey player, Hugo is just delicious.  He is swoon worthy and I love how he cares for and supports Jesse.  There are some trials and tribulations that occur and I really enjoyed witnessing the evolution of their relationship.

This book does have a few triggers that may be difficult for some readers. The author touches upon mental health issues with great sensitivity and respect. There were moments where I felt heartbroken and feared that a HEA wouldn’t be possible. The author also remarkably addresses disability awareness and beautifully illustrates that all are worthy of love.  Breakaway is a novel that will put your heart through a blender, but also gives the reader a sense of healing, hope, love, and happiness.  So even though M/M romances are not my preferred trope, Breakaway is a well written sports romance that captured my attention immediately and put me through all of the feels.