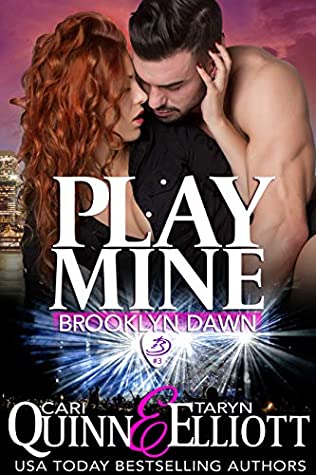 “You need to be careful.”

The day the manager of my rock band said that changed my life.
As Brooklyn Dawn’s newest member on probation, I didn’t think I’d have to worry about anything but rocking hard.
I didn’t expect my tumultuous past to come out.
I definitely didn’t expect us to be in danger.
I never considered I’d need a bodyguard.
Or that my best friend in the band, our drummer, Cooper, an ex-Ranger, would vie for that role—along with a much more personal one as my guy.
Forget the bodyguard my label hired. Cooper is determined to take care of me.
Onstage and off. In bed and out.
When friends become foes and strangers become threats, trust is all I have left.
But falling in love with the last man I ever expected to is just one more complication while I’m trying to stay drama free and most importantly, alive.
Author’s note: Play Mine is a standalone friends to lovers rock star romance. The Brooklyn Dawn series has a suspense arc that goes through the entire series. It will be resolved in the final book. Play Mine ends in a happily ever after with no cliffhanger for the main couple.

Amazon: https://amzn.to/2HwRQih
For a limited time, Play Mine will be available on all platforms before going into Kindle Unlimited: https://books2read.com/u/38E1k6
📚 Add to Goodreads ➡️ https://bit.ly/3kPUDS1

These two authors never fail to come together to write an epic rockstar romance that has me joyfully laughing and swooning, all while also keeping me on the edge of my seat in suspense. Both have collaborated on several books together and one would think that they’d run out of ideas, but no, each character is unique and the storylines never fail to captivate me.

Brooklyn Dawn is back and Play Mine focuses on their newest member,  pianist Teagan and drummer Cooper.  I adore Teagan as she is this effervescent, spirited soul that is both likable and relatable.  She has secrets from her past that haunt her and is insecure about her place in the band.  Yet, this girl, while vulnerable, is also strong and her strength of character continues to grow throughout the story. Cooper is positively charming.  This ex-army Ranger and delicious drummer is also a great friend to Teagan and to the rest of his bandmates.  He has a protective streak and is commanding when he needs to be, but also has a kind-hearted presence. It was enjoyable to see him all tied in knots over his feelings for Teagan.  These two together are dynamite with several kindle melting scenes and to witness their relationship unfold was very entertaining.

Play Mine is not only a friends-to-lovers rockstar romance, it is also a thrilling novel with an aura of suspense.  Threats are circulating around the band and Teagan seems to be the most recent target.  It is someone for her past or perhaps involves something more sinister? The events occurring within the pages left me wondering just who is the real target, who instigating it, and why.  Some of the mystery is resolved by the end of this book and the couple do get their HEA, but the main underlying mystery is not entirely wrapped up.

The Brooklyn Dawn series continues to enthrall me as each of the band members exhibit their distinctive personalities and contribution to the band.  They are an energetic bunch and their camaraderie is impressive. With each performance, the authors create palpable excitement that shines through the pages.  Play Mine is a story of friendship, music, family, and love.  It is an engaging friends-to-lovers romance with an interesting storyline and intriguing suspense.  It is a book that you won’t want to miss!

About Cari Quinn:
USA Today bestselling author Cari Quinn (who is also half of bestselling author Taryn Quinn) grew up wanting to be a singer more than anything else. When she realized she probably wouldn’t be hired as the opening act for the Foo Fighters, she stopped singing and started writing. Now she happily writes about rock stars, MMA fighters, suited heroes, bodyguards and everything in between. And she blasts her music as loud as the neighbors can stand, because hey, she’ll always be a rock star in her own head.
Connect with Cari Quinn:
Facebook:  https://www.facebook.com/CariQuinnAuthor/
Twitter: https://twitter.com/cariquinn
Facebook Group: Word Wenches Reader's Group
-----
About Taryn Elliott:
I'm USA Today Bestselling author Taryn Elliott. I'm a music freak who loves everything about telling stories. I have way too many ideas rattling around in my head, but music almost always ends up in the story somehow. I'm very lucky to have a job that allows me to slip into the shoes of musicians, actors, business women, tycoons, bodyguards, chefs, bakers, carpenters, inventors, bartenders, wine makers, artists, and so many more characters to come. Talk about living the dream.
Oh, and I write 85% of this with my bestie and writing partner, Cari Quinn. We also write super sexy paranormal romance and erotic romance under Taryn Quinn.
Enough about me...go read about one of my hot guys. They're far more interesting. ;)
Connect with Taryn Elliott:
Website: http://www.tarynelliott.com
Facebook:  https://www.facebook.com/TarynElliottAuthor/
Twitter:  https://twitter.com/TarynElliottFic
Facebook Group: Word Wenches Reader's Group
----
For more Cari Quinn and Taryn Elliot
Sign up for their newsletter: Rock On with Cari Quinn and Taryn Elliott
Joint Facebook Page: Cari and Taryn
Joint Facebook Group: Word Wenches